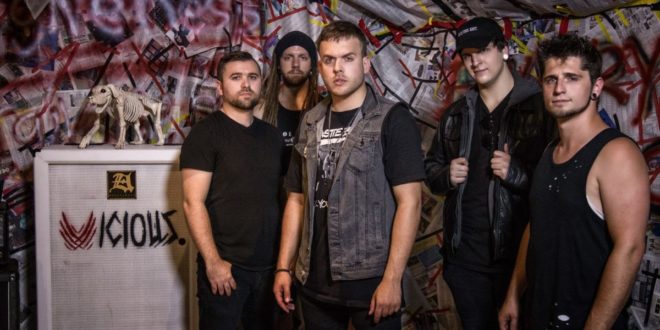 Vicious. Release Single To Raise Funds for Rock to Recovery

After Allentown alternative rockers Vicious. made their official debut, teaming up with New Noise Magazine to unveil the official music video for their track, “Everything Sucks,” the band is back with a new track for a charitable cause. Today, Vicious. has teamed up with Rock to Recovery, and idobi Radio to unveil “Conflict,” a song the band wrote for those who are struggling, and need to know they are not alone. For that reason, Vicious. will be donating proceeds from downloads of “Conflict” through their Bandcamp page to Rock to Recovery, an organization which gives people, such as recovering addicts/alcoholics, victims of abuse, troubled teens, wounded veterans, or any individual in recovery, a chance to have fun expressing themselves, working as a group, and experiencing the natural high only music can produce. On the release and partnership, vocalist Sam Sky states:

“I couldn’t be more excited to have teamed up with Rock To Recovery for our release of our brand new single ‘Conflict!’ We thought it was brilliant that there was a nonprofit out there specifically designed as a release for musicians and non-musicians as well who struggle with just about any problem. I think often people get what they need from musicians emotionally and forget that they are literally putting all their emotional skeletons out in the open, leaving them vulnerable. Living life on the road takes the soul of most in a way, and to cope, addictions and emotional issues arise inevitably. This is our way to show love for all our kin out on the road, battling their demons and trying to follow their dreams. ALL first week proceeds will be donated to Rock To Recovery, blessed to be a part of this!” – Sam Sky

Hailing from Allentown, PA, four-piece aggressive alternative rock band Vicious. consists of Sam Sky (Vocals),Dan Artim (Guitar), AJ Larsen (Guitar), and Chris Arcand (Bass). Formed in 2016, Vicious is the brainchild of Sky, ex-I Am King frontman, who recruited long time friend and former bandmate Artim before acquiring a full line up and honing in on a sound they loved. Pulling inspiration from heavy metal, alternative rock, and grunge, Vicious. is a free-for-all, let loose and rock out kind of band. Lyrically, recurring themes of conflict and pain are discussed, both internal and external. The band aims to write lyrics that say what everyone is thinking, but either don’t know how to or are too afraid to actually say it.

Earlier this year, the band hit the studio with audio engineers/producers Mitch Rogers (Bxd Blxxd, Varials) and Andrew Baylis (Nine Shrines) to lay down a slew of new tracks, to be released this fall. With melodic vocals and hard-hitting lyrics, Vicious. emphasizes the message that you are not alone with your demons. Frontman Sam Sky expands, “We all have them. Everyone struggles and feels like they’re drowning at one point. Find the strength in yourself, and give the finger to anyone in your way.”

Head to idobi Radio today to listen to and learn more about how to purchase Vicious.’ new track, “Conflict,” and donate to Rock to Recovery. To stay up to date, be sure to follow the band on Facebook.

Previous Interview: Cloud 9 Vibes at Rootfire At The Park
Next MXMS Share “Something In The Way” (Nirvana Cover) Video