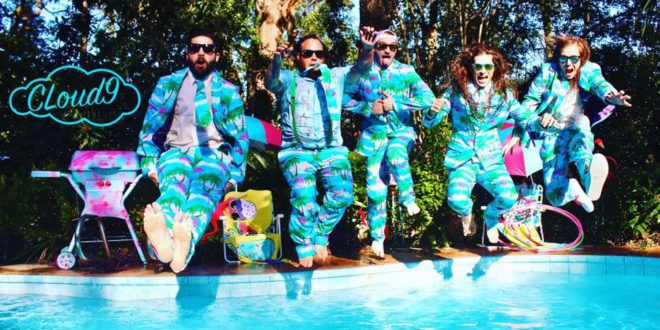 Interview: Cloud 9 Vibes at Rootfire At The Park

Press play on Cloud 9 Vibe’s latest EP, Welcome To The Beach, and you will suddenly find yourself soaking in the sunshine with sand between your toes. Cloud 9 Vibes consists of 6 Floridians all coming from different musical backgrounds, with the simple message “Be excellent to each other.” The band’s aesthetic is driven directly from positivity and unity, which radiates immensely off their lyrics and never fails to put a smile on your face. I had the pleasure to sit down with Boogie, Moon, Kyle, and Chase at Cocoa Beach’s Rootfire At The Park to discuss their musical influences, inspirations, and future plans.

ME: First of all, how did the name Cloud 9 Vibes come about?

Boogie: When we were writing our first record, Welcome To The Beach, which you can find on Spotify, we wrote the chorus to the song “Beautiful Day,” and one of the lines was “Flowing up on cloud 9.” Through the process of recording it, our singer Tucci did it in such a funny way, like somebody squeezed him by the stuff. As we were sitting down later that night trying to figure out what we should call ourselves, one of our friends gave us a list, and one of the things on the list was an inside joke [Cloud 9 Vibes], and that was the first thing that came to our mind. We just laughed, and it stuck. It just fits the name and vibe.

Moon: You take hours, weeks, days, or months to try to find a band name, but there’s always that band name that sticks. And that one stuck and felt right.

ME: So you perform tomorrow afternoon here at Rootfire At The Park. What’s your favorite part of playing your music out live?

Moon: Seeing people that we’ve never meant before when we’re playing smiling huge, and you can just tell that their day is brighter in the sense of having so much positivity around them. It’s almost euphoric, the looks on people’s faces while we’re playing. We have these flamingo suits that go along with our very fun personality, and people don’t know what to think when they see us. We start playing, we start having fun — it’s just a hype.

Kyle: I agree with Jersey a lot; just watching people’s reactions. We go on stage, and we’re just decked out. Even if any of us are having a bad day, just getting on stage and seeing people be like “Oh my god, that’s awesome.”

Chase: Yeah, just the energy associated with it and the look’s on people’s faces; I think that’s fun. Personally, I just enjoy getting up there and having a good time. We use it as therapy, so it’s something that we enjoy doing. You can’t have a bad day when you get to play a show. It could be the worst day in the world, but I still got to play a concert, so my day was still cooler than yours.

Boogie: I could play terrible and still have a better day! For me, it’s the freedom, the freedom to be who I am and let loose. Those are the best moments of my life when we just get to go out there and let loose, because we leave nothing on stage. We give it our all, and start to finish, it’s nothing but energy. Freedom of expression too, we get to be whoever we want to be, and people love that.

ME: It’s no secret that the band’s aesthetic and lyrics drives largely from influences of the beach; what makes the beach impact Cloud 9 Vibes so much?

Moon: It’s the best place on earth; there’s no better place to be positive than at the beach. I grew up at the beach, and I’ve never had a bad time out there. It’s just a different vibe. There’s a lot of people who don’t get that opportunity to be at the beach everyday, so if you play our record from front to back,  you kind of get the feeling that you’re there.

Chase: It kind of represents something greater than that. Not everyone gets the chance to go to the beach, but most people have something like a safe haven, and that’s what it is for us. Why we write about it a lot is because the beach is our contentment and a place we can go to feel sane.

ME: “Good Morning,” your first single off your debut album, is full of positivity and spreads such a forward-looking message; what inspired you guys to create this song?

Boogie: “Good Morning” was the first song we wrote after “Beautiful Day.”

Moon: It was actually morning; we stayed up, me, Boogie and Tucci kind of locked ourselves in a garage for pretty much two months. It was morning time, and we were just jamming riffs and was kind of a perfect premise, like if I could wake up and listen to a song that could totally change my attitude no matter what mood I was in. Before we even knew there was a song, Boogie had the lyrics written, and it was amazing.

ME: As a band that thrives off positivity , what do you guys hope your listeners take away from your music, especially living in a time of endless hate and negative events taking place all over our country and globally?

Boogie: Happiness is a choice, 100%. You’re in control of your mind state.

Boogie: It’s all about you. Welcome To The Beach is like when you get put in negativity, like step back and evaluate how you would handle it, because it doesn’t matter what other people are saying to you or how they feel about you or what you’re doing. As long as you’re doing what makes you happy, nobody can say shit to you because you’re living life and winning

Moon: The band is more positive together, like we always joke, always laugh, always have fun with other. It’s almost terrible to listen to anything on the radio: sex, drugs, violence, anything you could think of. I personally have a four year old son, and that changed my outlook on life a lot. The one thing I love about the positivity is that this is music I can show my son, and he can sing it with me and have a good time. He comes on stage with us and performs with us, even. Like I said, the best part about the positivity is that we want to bring that to a mainstream platform; we want people to have options, like you don’t have to listen to what’s on the radio. You don’t have to fill yourself with all that negativity and nonsense. You don’t hear these amazing reggae bands on your local radio stations. We’re reggae in the sense of vibe, but our music is more pop than anything. The principle behind that is that we want to take our message of positivity and love to mainstream radio.

ME: What albums and artists have influenced Cloud 9 Vibes as a band, and yourselves personally as musicians.

Cloud 9 Vibes (Collectively): Cap’n Geech & The Shrimp Shack Shooters – from the movie That Thing You Do!

Chase: I grew up the in punk-rock scene, so that’s kind of my influence. I listen to a lot of pop music but I don’t really fancy myself much as a guitar player. I’ve been thinking about this  actually- I’m an actor playing a guitar player on stage. I like to do more songwriting, so I like a lot of singer-songwriter, acoustic stuff.

Moon: All of us listen to different music, and our music reflects that so much, because we don’t really have one song that sounds like the other, and it’s mainly because we’re all listening to different kinds of music.

Boogie: I listen to modern-pop and hip-hop, which is kind of how I ended up becoming a rapper. It’s cool to see our different backgrounds melted together. If you would have told us that you had a band full of people from our backgrounds, I’d be like “What the fuck are they doing?”

ME: What does your typical writing process include – from the initial idea of a melody for a song to the final copy?

Boogie: It varies from song to song.

Chase: It’s changed a lot, because the band has changed quite a bit.

Boogie: “Your Move” is a song we’ve been working on; I believe it started with a guitar riff.

Chase: Yeah, I just had a little riff and started playing with it.

Moon: Then I started to add some drums to it, and then we all individually turn into our miniature producers.

Boogie: One of us starts with an idea, and in-between songs at practice, Chase will start playing a riff, then Jersey with the drums, and Kyle with the bass, and me and Tucci are always sitting there thinking about lyrics. One day, Chase was like “I wrote this hook the other day, but I don’t know if it will sound good, do we have anything it will go over with?” and it all kinda falls into place.

ME: If you could open for any band or artist (dead or alive) who would you pick?

Moon: I have two opposite sides of the spectrum: Guns N’ Roses and Bruno Mars.

Boogie: I wanna do the Super Bowl; every year I see it, and I’m like “I bet I could do that.”

Chase: I’ll open up for anybody, as long as there’s people there.

Kyle: If Pink Floyd could be a thing with all it’s OG members, that would be mine.

ME: What are the future plans for Cloud 9 Vibes? Any touring or new music you guys hope to accomplish within the next year?

Boogie: Take over the world.

Moon: Within the next year, hopefully be on the west coast; that’s a legit goal for us. We have one record that’s in pre-production, and then we already wrote another record that we’re still working on, so I think I’d be cool to have both of those released within the next year.

ME: Lastly, any particular acts you’re excited to see this weekend at Rootfire At The Park?

Chase and Boogie: Kash’d Out, The Trees Of Life, The Ellameno Beat.

Moon: I’ve seen all of these guys a million times, and I’m still excited to see them again this weekend.