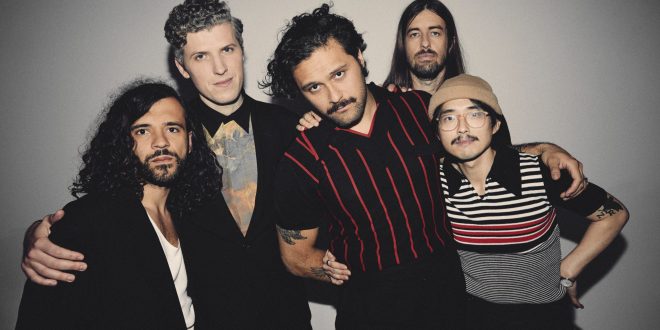 Today, Gang of Youths provide a final taster of the album angel in realtime. before its release on Friday, sharing the brand-new track “spirit boy.” The band’s last single “in the wake of your leave,” has debuted on the Billboard AAA charts and was praised by BBC’s Jack Saunders as “one of the most stunning examples of just how good their new record is going to be.” The band’s current rising status has also included a string of sold-out headline shows, an arena tour with Sam Fender, and a NME cover feature.

The album features all the big moments that have soundtracked Gang of Youths’ rise, including “the angel of 8th ave.,” “unison,” “the man himself,” “tend the garden,” and “in the wake of your leave.” The album’s previously unreleased tracks provide plenty more, with an experimental hybrid of contemporary American minimalism, and electronica on “you in everything,” the 2-step and big beat rhythms of “the kingdom is within you,” and the cathartic conclusion provided by the sweeping, multi-textured “goal of the century.”

New single “spirit boy” is the beating heart of angel in realtime. The song features Shane McLean, a musician specializing in Taonga Pūoro (the traditional instrumentation and music culture of the Māori people) and contributes spoken word. Le’aupepe recalls:

“We were fortunate to have Shane McLean, an outstanding musician and Taonga Pūoro facilitator, write and perform a spoken verse in Te Reo Māori. A wonderful Māori woman performed “rongoā” on me — a sacred healing practice. It was a transformative experience, and I’m still not quite sure why. There was a moment when this wonderful woman looked at me and said “you’re a wairua boy” — wairua in Te Reo means something like “spirit”.

angel in realtime. includes other singles such as Top 10 US Radio hit “the angel of 8th ave.”, and “the man himself” and the most recent track “in the wake of your leave.” Collectors and hardcore fans can grab a double-white vinyl edition of the album with an alternate sleeve from key indie stores, or a selection of bundles and merch which are packaged with a signed art card. Pre-order angel in realtime HERE.