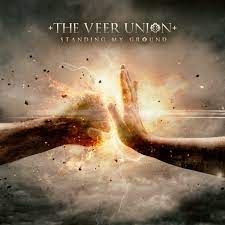 Metal and punk are cousins, and in the new single “Standing My Ground” from heavy rockers The Veer Union, we’re reminded just how close a familial bond the two genres really have. While there’s a lot to be said about the brawn of the instrumentation in this single and its accompanying music video, there’s perhaps just as much to be said about the versatility of the lead vocal, which modulates rather effortlessly between melodic and growling tones. These players are all about duality, and to some extent, that’s what “Standing My Ground” seems to have been made to state.

The harmonies that are in this track are undoubtedly as expressive as any of the guttural screams we encounter, and one could even argue that the contrast between these two methods of delivery really enhances the emotionality of the lyrics even more than it would have been to begin with. There are more than a few metal acts that try to balance the fierce with the melodic, but of the current generation of players trying to make a name for themselves in the underground, this is probably one of the more liberal and adventurous uses of the split-style that I’ve come across this year.

These riffs are certainly at the center of all the action in “Standing My Ground,” and I think that The Veer Union wanted to put special panache on the guitar element in this single specifically because they could. They aren’t messing with synth componentry or a lot of external compositional influences that could corrupt the pureness of their heavy sound in this single, and I would even go so far as to say that they’re making the riffage a key component of the narrative to emphasize the fact that most of their contemporaries simply cannot.

“Standing My Ground” features a drum element that instantly feels like an agent of chaos when we first hear it in the master mix, but it’s still significant enough to rank as a pivotal point of communication for the track as a whole. The Veer Union’s unrelenting desire to use every inch of space here makes a lot of their closest rivals in the underground seem a little underwhelming to say the least, but it’s worth noting that they aren’t overextending themselves with the material for no other reason than to sound larger and harder hitting than they actually would be on stage.

Rockers really shouldn’t miss out on what The Veer Union has cooked up in this most recent studio offering, primarily because I think it’s such a solidifying release for what is becoming a really interesting band to follow on the left side of the dial these days. There are others trying to deliver something akin to “Standing My Ground” both live and in the recording studio, but if you’re looking for a cohesive punk/metal crossover that owes nothing to the established order of what rebellion is “supposed” to sound like, it’s best to go to the source of contemporary excitement.