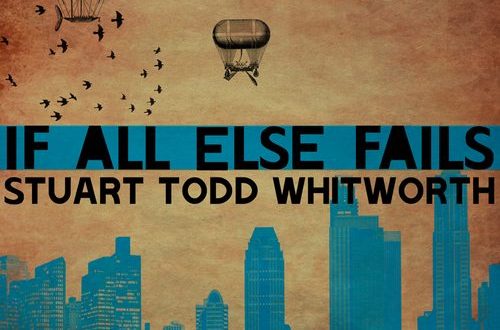 Springing to life like a beam of sunshine in the early morning, and possibly just as inspiring in some respects, a boldly colorful riff comes swinging out of the silence in “Rachel Speaks” that could make even the most devoted of wallflowers want to step out of their comfort zone and onto the dancefloor to join a kindred spirit or two. This track’s magical melodicism is just a sample of what Stuart Todd Whitworth is offering up in his new album If All Else Fails, which fires off sixteen unforgettable songs as pop-friendly as they are mildly rock-flavored.

While many of his contemporaries have been hung up on cut and dry harmonies lately, Stuart Todd Whitworth appears to be interested in coupling sonic excess with unbridled melodic potency in tracks like “How to Heal,” the album-opening “One More Chance,” “Prologue of a New Year” and “Happy.” In these songs, he adheres more to old school pop principles than he does anything else, and subsequently sounds more mature in his execution as a result. A lot of time and love went into all of the material here, and you don’t have to be an expert critic to recognize that in If All Else Fails.

I love the texture of the instrumental wallop we find in the bruising “CJ Sleeps,” temperamental “Opus 4” and simple “Just Me.” Where words fall short of describing whatever emotions are occupying his heart at the moment, Whitworth fills in the edges with a sonic prowess and melodic surrealism that does all of the talking for him, making it harder for us to dismiss any of the songs here – both instrumental and lyric-filled alike – as being filler or mere last-minute additions to the tracklist. This artist has no time for overindulgences that don’t contribute to his narrative, which is a lot more than I can say for some of his peers.

Though I would have put “One More Chance” and “Where You Are” closer to the album’s conclusion instead of starting things off with their harmonies, I can understand why Whitworth placed the title track at the end of the record to create a sense of finality that wouldn’t have been present here otherwise. I sincerely hope this isn’t the last LP he ever records, but if it ends up being his swansong, I must admit that it’s a near-perfect culmination of everything his longtime fans would have wanted in a final bow.

Whether you’re a first-time listener or have been following Stuart Todd Whitworth’s story throughout the 2010s, his new album If All Else Fails is a phenomenal independent effort from an undisputedly talented source. When an LP takes as many years as If All Else Fails took to complete, you end up with one of two records – either a poetic breakthrough, or a bloated attempt at immortality, and this is unquestionably the former. Whitworth has a place in my heart after hearing this release, and once you check it out for yourself, I think you’re going to feel the same.

Tags if all else fails single review stuart todd whitworth