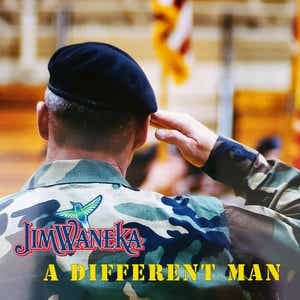 In his new single “A Different Man,” country singer Jim Waneka creates a vivid story of the American soldier as so many of us have known firsthand using so much more with lyrics – for this songwriter, verses are but a single layer atop which to build a complete portrait. There’s a sensitivity to the voice, the harmony, and the very stride of the percussion behind Waneka in this performance that speaks directly to his intimacy with the narrative he’s developing, and best of all, it has the melodic sensibilities of a track made specifically for country puritans like myself.

The strings in this single stab at the percussion rather than simply riding their steady beat into the sunset. There’s a texture to their melodicism and even a bit of physicality to their presence in this mix that revolves solely around the placement of the lyrics and Waneka’s soft lead at the top of the track; simply put, I think we’d likely get a different version of “A Different Man” in a live performance from this player. This feels like a template, and one so beautiful that it makes you have to wonder how amazing an unplanned rendition of the composition would sound.

Waneka’s vocal is larger than life here, and yet he’s never having to compete with the different instrumental components for his fair share of the spotlight in “A Different Man.” The groove is natural, the guitar a heaven-sent partner for his voice, and from beginning to end it feels like we’re listening to something coming straight from the singer’s heart. In country music today, spellbinding songcraft starts with leaving all of the synthetics to the side, and in this way, I think it would be safe to call this artist one of the more promising players I’ve stumbled across this year.

You don’t have to be the biggest country fan around to like what Jim Waneka can serve up behind the microphone, but in “A Different Man” especially, his charms are difficult to resist. Waneka’s soulfulness is unstoppable, while the lyrics here are uncompromising and illustrative of what returning home from service can be like for scores of men and women in this country every day. With so much division plastered on the television and computer from one month to the next anymore, this is a song, a singer, and a story that I think everyone can get behind, and I doubt other critics and country fans will disagree with me.