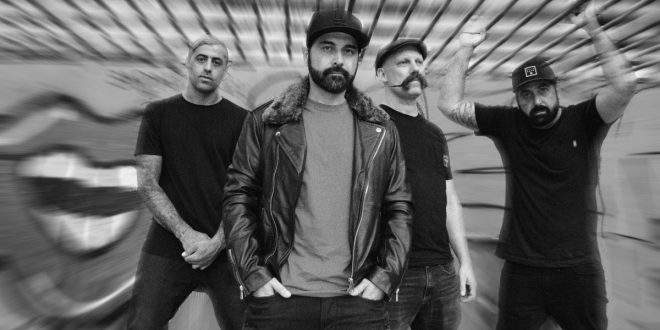 “Revolt, Find the kids in cages, Our bloodline’s the same, We’re not contagious, Revolt, Burn the pages, Fight the system, The battle rages, Revolt”

At the height of the 2020 global pandemic and social unrest, while millions of people are quarantining at home or risking their health and safety by taking to the streets in protest, Fear No Empire has come together with a powerful message that further shines a light on injustice and calls for change. Fear No Empire is Ali Tabatabaee – Vocals (zebrahead,) Ben Ozz – Bass (zebrahead,) Dan Palmer – Guitar (zebrahead, Death By Stereo,) and Mike Cambra – Drums (The Adolescents, Death by Stereo and Common War.)

Fear No Empire debuts their musical uprising with the song and video for “Revolt,” out on August 19. “I am very eager for everyone to hear “Revolt!” It’s the first song off of the Fear No Empire EP, and extremely topical as it tackles how the Trump administration’s horrific policy of separating and imprisoning immigrant children from their families has intensified by the surging COVID-19 pandemic,” says vocalist and songwriter Tabatabaee.

Throughout the songs on their debut, Fear No Empire voice their anger and frustration with the world around them and stand up against racism, oppression, police brutality, voter suppression, anti-LGBTQ+ discrimination and violence, and all forms of social injustice. “When we decided to start a new band, we knew how important it was for us to use our platform to call out injustice and help bring positive change to the world. We are very proud of these songs and the messages they convey,” says Tabatabaee.

For many, xenophobia, systemic racism, and racial inequality are a real part of their everyday existence, yet the person holding the highest office in America uses blatant racist language and dog whistles to appeal to white supremacists, Nazi sympathizers, and nationalists to further polarize us by stoking fear and hatred for political means. This is not exclusive to the United States, as nationalism, populism, and far-right conservatism are on the rise in many countries.

As the Black Lives Matter movement reverberates worldwide, protests are leading to an awakening and cultural shift as our voices come together in solidarity to fight for change. “Our goal was to make the music as powerful as our message and hope it resonates with people and inspires them to use their voice. Fear No Empire is our protest,” says Tabatabaee.

Stephen Vicino is the founder of MusicExistence.com. He created this site to give talented musicians a voice and a way to be discovered.
@@svicino
Previous Benediction Announce New Album ‘Scriptures’ and Release Music Video For Their First Single, “Rabid Carnality”
Next Interview With Gary LaBarr Of Walker’s Cay