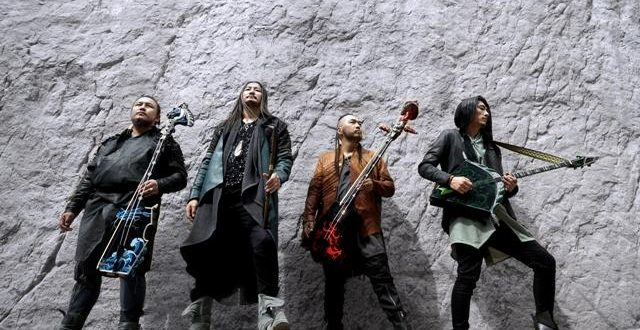 3
SHARES
FacebookTwitter
Mongolian rock sensation THE HU have joined forces with Papa Roach frontman Jacoby Shaddix who adds guest vocals to the band’s critically acclaimed single “Wolf Totem,” the original version of which charted at #1on Billboard‘s Hard Rock Digital Song Sales chart back in April and the highly acclaimed video has garnered over 21 million views. The original single is featured on THE HU‘s Top Ten-charting debut album ‘THE GEREG’ which was released on September 13 via Better Noise Music.

Listen to “Wolf Totem ft. Jacoby Shaddix” here: https://thehu.ffm.to/paparoach_wolf
“I’m honored to be part of such a powerful new blend of rock n roll,” says Shaddix. “The Hu are the real deal. Don’t sleep on this.”
THE HU have been making waves across the globe with many sold-out shows and festival appearances presenting their signature brand of “hunnu rock“–a one-of-a-kind mixture of Western rock music combined with traditional Mongolian instrumentation and throat-singing sung in their native language. On December 10, the electrifying live act completed their last show of 2019 in Los Angeles at the Fonda Theatre. This marked the conclusion of their acclaimed three-month long headlining North American tour, which sold over 34,000 tickets with a 66% sell-out rate, equaling 39 sold-out dates total. THE HU will continue their touring in January 2020 across the UK/EU for 23 shows, of which 14 are already sold-out.
The impact they made in 2019 worldwide is also evident in the critical acclaim and year-end best-of lists that the band’s BETTER NOISE debut, ‘THE GEREG’ found itself listed on. Loudwire listed ‘THE GEREG’ among its Top Albums of 2019 and Revolver Magazine listed the band’s video for “Great Chinggis Khaan” among their Top 10 of the year. In the UK ‘THE GEREG’ placed among Top Albums of 2019 in Classic Rock and Metal Hammer Magazines.

NewYork Based Photographer. Music Enthusiast with a background in Graphic Design. Whether I'm shooting a live event or just out wondering the streets its about capturing the moment.
Previous Full Terror Assault Open Air Festival Returns for Sixth Year
Next Suicide Silence Release Music Video For The New Single “Feel Alive”