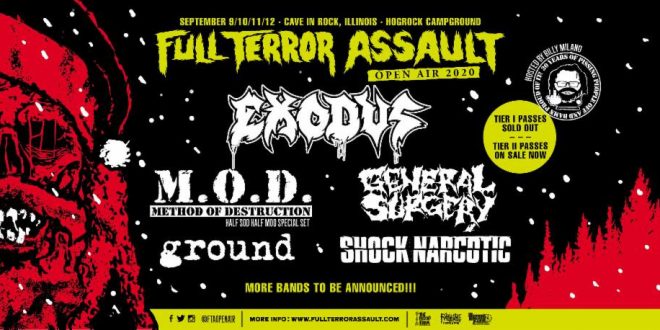 2
SHARES
FacebookTwitter
Full Terror Assault Open Air Festival 2020 (FTA) has revealed Exodus, M.O.D., General Surgery, Ground and Shock Narcotic as the first bands confirmed for the sixth edition of the massive outdoor festival, scheduled for September 9-12, 2020 in Cave-in-Rock, IL.
“Exodus are proud to announce our addition to the 2020 Full Terror Assault festival!”says guitarist Gary Holt, who will be making his return to Exodus after a six-year hiatus to tour with Slayer.
“It’s gonna be a blast to be a part of the sixth year of this festival, and it is the first US Exodus show we have booked going forward! Raging thrash metal out in the woods, super killer underground festival -the way I like it! This will be RAD!”
M.O.D.’s Billy Milano, who performed at Full Terror Assault Open Air Festival 2019, will make a special appearance, a 50/50 set that culls from M.O.D.’s catalog and also reaches back into the archives to unearth S.O.D. classics. Milano will also serve as festival host and has been tapped for a not-to-be-missed spoken word segment.

Milano expounds on his upcoming FTA duties: “Greetings from Billy Milano, legendary grandfatherand pancake maker. I also kinda sing for M.O.D. FullTerror Assault was an amazing experience. I am deeply honored to be the host of the next fest. I’m planning on interviewing all the bands for the fest, aswell as the fans. A spoken word/comedy performance is going to take place with a fan interaction. I am going to video document everything so we can show Europe we have a great underground fest here in America as well.”

After a decades-long career, Swedish grindcore legends General Surgery will make their first-ever Midwestern appearance at FTA. “We are extremely happy to finally play Full Terror Assault and to meet our fans in the mid–US,” says drummer Adde Mitroulis. “Let’s celebrate the death and gore together in Cave-in-Rock next year!”
FTA is the first true European-style open air festival for extreme music fans in the US. Fans will experience a day of early camping, which is free throughout the entire weekend, and a DJ party on
September 9. Thursday, September 10 will continue the pre-party with contests, music and activities.  The festival kicks into full gear on September 11 and 12 for two more days of non-stop blistering sets from the best bands in extreme music. More than 50 bands will play over the course of the weekend. In addition to live music, FTA will host food vendors and a “Terror Market.” FTA is a BYOB event.
Tier 2 “FTA All The Way” Passes are on sale now at special Holiday pricing and include the 2 Day
Shock Pass for $69.99, the 3 Day Panic Pass for $79.99 and the 4 Day Terror Pass for $89.99. Early
bird tickets, known as Tier 1 “F*cking Lifer” Passes, sold out in just one week. Camping and showers
are free and camping upgrades are available, including RV sites. For a list of available passes and
individual upgrades, visit http://bit.ly/ppass20. For upgrade packages, visit https://bit.ly/33Ag3cC.
FTA will once again be held at Cave-in-Rock’s Hogrock Campground, nestled within the picturesque Shawnee National Forest, with over 100 acres of wooded campground land, scenic lakes, and even a beach. Cave-in-Rock is located within a five hour drive of major cities such as Indianapolis, St. Louis, Louisville, Nashville and Cincinnati, and roughly six hours from Chicago, Atlanta, Columbus and Kansas City.
Full Terror Assault Open Air Festival is an independently run event managed by a small team of passionate, hard-working music fans – including a promoter who has been involved in the underground and extreme music for over 25 years. The festival originated with the goal of providing fans a true open air festival atmosphere without having to travel to Europe, and each year that goal has been met, with stories of the festival’s success spreading by word of mouth online and in the underground.
Stay tuned for more band announcements!

NewYork Based Photographer. Music Enthusiast with a background in Graphic Design. Whether I'm shooting a live event or just out wondering the streets its about capturing the moment.
Previous Flat River Band Stands Out On “Christmas Time”
Next The HU Share New Video Single “Wolf Totem” Ft. Jacoby Shaddix of Papa Roach 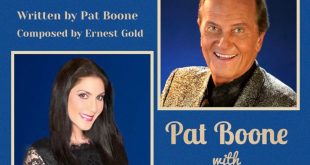 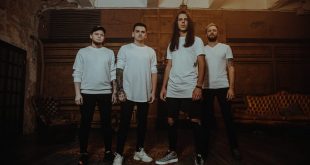