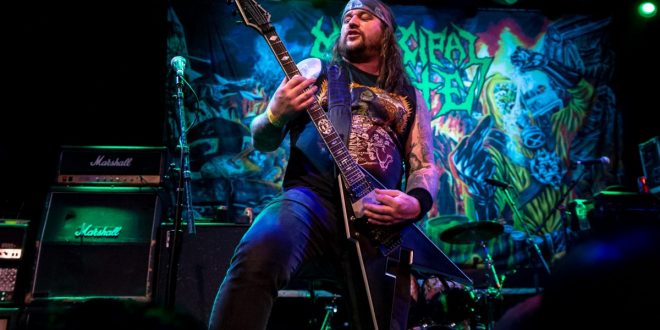 Live Review + Gallery: Municipal Waste, Sick Of It All and Napalm Death At Bowery Ballroom In New York City 10-11-19

First off lets just start by saying the line up on this tour put simple is just insane! The tour consist of the Speed Metal party maniacs from Richmond, Virginia Municipal Waste, next you have New York Hard Core legends Sick Of It All and then all the way from Birmingham, UK you have Grindcore heavyweight veterans Napalm Death. This tour is unique in the sense that it features all three of these acts holding the headliners position in rotating spots at each stop of the tour with Chula Vista, California’s Take Offense as the main supporting act.

On Friday, October 11th the tour pulled into NYC for the first of two Sold Out nights at the Bowery Ballroom which is located just outside the heart of the LES in Manhattan, and on that night groups of fans from all walks of punk, metal and hard core all got together united under one roof for a night of explosive friendly mayhem with one hell of a stacked bill that included special guest for that night, Brooklyn’s very own Subversive Rite. Unfortunately do to some serious transit delays with the NYC subways system and also wasting even more time by hoping into an Uber, I managed to miss both Subversive Rite and Take Offense, so I can’t even tell you anything about the first hour of the show.

For me the first band to take the stage was Municipal Waste, who on this very same day had just released their brand new EP The Last Rager. I’ve seen Municipal Waste plenty of times and I knew exactly what level of insanity was about to break out. As the band took the stage in front of a packed house they wasted no time getting this rager started as they opened their set with “Unleash the Bastards”,  immediately unleashing a tornado pit that engulfed nearly the entire floor sending bodies flying onto the stage to only dive back off into the frenzied mayhem. Following the opening song, frontman Tony “TBuzz” Foresta stated “What is it 8 fucking thirty or some shit? We’re already raging!” Nailing it with that statement the raging ensued as the band fueled the intensity of the speed freaks by ripping through bangers like “Poison the Preacher”, “Wave of Death” and “Headbanger Face Rip”, all the while Foresta incited the crowd to “Fuck shit up!” And urging a circle pit song after song as if the crowd needed any reason to go insane. With a smile on his face the entire time, it was clear Foresta was enjoying himself just as much as the crowd was as he lent a hand helping up any crowd surfer that hit the stage. As the band finished up their set with “Born to Party” Foresta would ask “Did we have enough to drink before the Municipal Waste set?” With a chuckle, he then reminded everyone “We’ve got a long night ahead of us.”

Next up to hit the stage were New York Hard Core legends Sick Of It All, who followed up right along with the same intense energy Municipal Waste had as they walked that hornets nest stirring the tornado on the floor right back up with “Injustice System”. The band continued to stomp through their set with the crowd carried on wilding in a frenzy. Before getting into the classic “Step Down”, Frontman Lou Koller reached out to the crowd saying “Let’s get an old school circle pit going where everybody goes one way, and the biggest guy in the room goes the other,” then all you old school hard core guys just get in the middle and start windmilling”. With Bowery already being an old school staple in the LES, Friday  night that old school vibe was definitely alive in full force, with the floor entirely being one giant pit as bodies dove off stage from right to left while others jumped onstage to sing along word for word while there was no security insight to give a shit what went down while the well diversed crowd united together enjoyed one hell of a fun filled night of chaos. Towards the end of their set frontman Lou Koller would go onto tell the crowd the story of their last show at Bowery, Koller said “The last time we played Bowery Ballroom was 1998, and we got banned when our boy Rat Bones jumped from the balcony. They thought we planned it, but we had nothing to do with it, Rat Bones was just crazy like that.” Koller then went on to dedicate “That Crazy White Boy Shit” to the legendary Bad Brains. SOIA had a few more songs after that before closing out their set with their 1994 album title track “Scratch the Surface”.

Napalm Death would hold the honor this night of closing out the show. The grindcore legends were unfortunately without bassist Shane Embury on this tour. As Napalm Death was well into their set, Greenway would point out that “Shane couldn’t make it out on this tour do to, lets just say “logistical problems” Greenway would then go on to make the introduction of longtime friend, roadie and Rigid Records owner Vernon Blake who was taking over Embury’s spot on bass and did not miss a single note. Napalm Death’s frontman Barney Greenway seemed to tone down the party vibe that was set all night as he stormed the stage with frustration as the sweat poured out of his body while the band belted out songs like “Suffer the Children”, “Silence Is Deafening” and a cover of the Dead Kennedy’s “Nazi Punks Fuck Off”, which all cover topics that are far more relevant than “partying and fucking shit up”. Though there was a definite mood swing in the air as Greenway spoke against the injustices of the world, it still didn’t stop the pit from moving and the bodies from diving off the stage, it just set the pace for a more serious vibe following all the chaotic fun and party that went down during the previous bands sets. Napalm Death’s setlist spanned across their massive discography from their 30+ year career that also included six tracks off their 1987 debut album Scum that included the final song of the set “Siege of Power”. Closing out a night that began more like the kick off to a backyard kegger, Napalm Death ended the night on a more serious note giving the crowd something more think about as they set back out into the city’s night.

SICK OF IT ALL SETLIST:

Tags Municipal Waste Napalm Death Sick Of It All

NewYork Based Photographer. Music Enthusiast with a background in Graphic Design. Whether I'm shooting a live event or just out wondering the streets its about capturing the moment.
Previous Of Monsters and Men share official music video for “Wild Roses”
Next EP Review: YUNGBLUD – “the underrated youth”