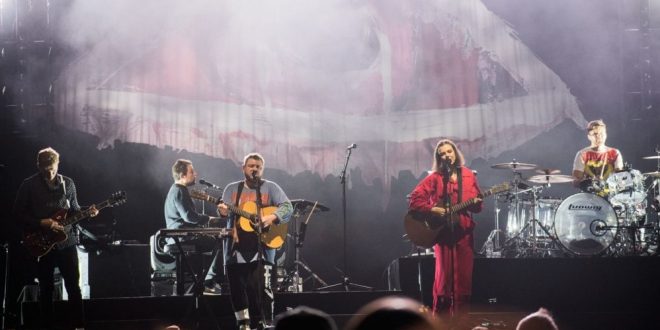 As their new album FEVER DREAM nears 50 million streams in a few month’ time and earns acclaim from Billboard, Huffington Post, Q (four stars), and more, Of Monsters and Men maintain their exceptional momentum and share the music video for “Wild Roses.”

Once again, the multi-platinum Icelandic phenomenon deliver a provocative and powerful cinematic companion to an equally heartfelt song. Teetering between gorgeous and chilling vignettes, frontwoman Nanna Hilmarsdóttir sings while floating atop a pool.

As blood fills the water and tears fill her eyes, the water eventually mimics her movements, bringing the visual to life in hypnotic fashion as it pays homage to Scandinavian horror classics with an Of Monsters and Men twist.

Regarding the song and video, Nanna commented, “‘Wild Roses’ shows an introverted side to the album and is inspired by what it is like to lean into your sadness. We wanted to capture that feeling in a performance for the music video, while bringing out a bit of uneasiness as well. So, we brought on choreographer Stella Rosenkranz to help create the movements you see. We also knew that we wanted to shoot the video in water with a bit of blood. To achieve this, director Þóra Hilmars immediately came to mind. We had talked about working together for years, and knew she would be perfect for a Scandi horror-inspired music video. The video was shot in a span of 12 hours in a beautiful and eerie swimming pool in Hafnaförður, Iceland, hours before going to the airport and starting our Fever Dream tour. We’re very happy with the outcome and are truly excited to share this with everyone.”

Previous Christina Holmes to join Donovan Frankenreiter on The Record Player US tour
Next Live Review + Gallery: Municipal Waste, Sick Of It All and Napalm Death At Bowery Ballroom In New York City 10-11-19