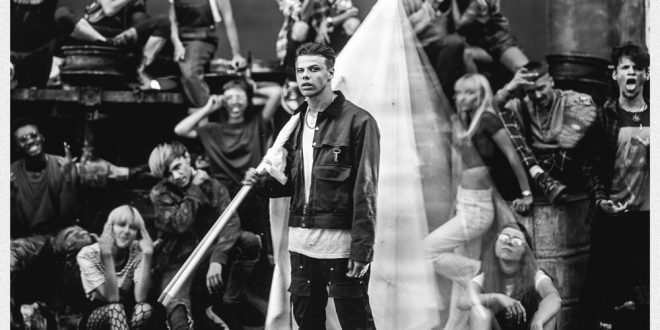 Released today is YUNGBLUD’s newest EP the underrated youth. The six song compilation has everything from headbangers to lullabies, and takes you on a short but steady journey through the mind of Dominic Harrison. The British songwriter is currently on his Twisted Tales Of The Ritalin Club Tour, promoting tracks off the new EP as well as 2018’s 21st Century Liability.

The EP begins with “braindead!”, a chaotic and sonically disturbing entry track that opens up listeners to the crazy world of Yungblud. The appropriately titled song leaves listeners feeling like their brain might actually be dying, yet somehow leaves you wanting more.

By track two Yungblud fans will already be familiar with “parents”, the catchy and melodic anti-authority anthem containing the best vocals throughout the entire EP. This song is a perfect example of Yungblud’s signature rhymes that pair both hip-hop elements and spoken word rudiments together, for a sound purely his own. The contrast between his choruses and verses creates for instability throughout the song, which is a common theme heard throughout the rest of the EP. Backed by impressive production techniques and unfamiliar sonic qualities, there’s no explanation necessary for the song’s 20 million+ streams on Spotify alone.

Halfway through the EP we see a shift in sound with ballads like “casual sabotage” and “hope for the underrated youth”, the almost title track that sparked the narrative of this entire project. The song is a highlight on the EP, but its real qualities shine during his live show. The connection he has with his fans while singing “hope for the underrated youth” is so powerful it’s almost unfair to compare it to the recorded version.

Finally, we get “waiting on the weekend”, the sweet sentimental acoustic track that will calm listeners down after the rollercoaster of emotions they just experienced. It leaves the audience feeling content and satisfied, yet still ready for what’s next to come in the Yungblud storyline.

The tracklisting of this release is perfect. Beginning with the hyperactive and over stimulating initial three songs, the EP then slowly relaxes the listener on the latter three tracks by creating a full circle listening experience. The order of songs may be insignificant in a digital era, but if you find yourself with a spare 18 minutes try listening to this release from top to bottom and see if you feel the same way.

Katie is a Toronto based writer for Music Existence. She loves all things rock n' roll & Star Wars.
@katietymo
Previous Live Review + Gallery: Municipal Waste, Sick Of It All and Napalm Death At Bowery Ballroom In New York City 10-11-19
Next SOFI TUKKER at Stubb’s BBQ in Austin, TX (10.17.19)