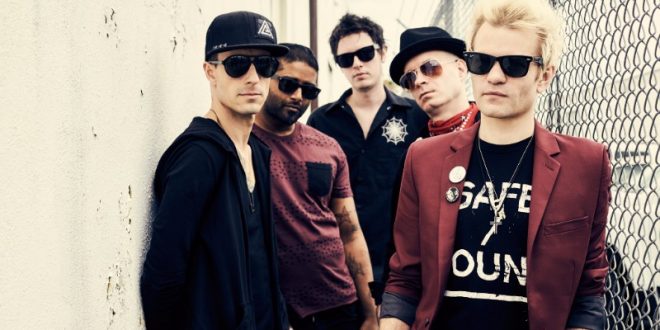 SUM 41 are thrilled to get new music out to the patient, die-hard, dedicated fans who have been with them all along. Today they released a brand new song and music video off 13 Voices called, ‘Fake My Own Death.’ Directed by Marc Klasfeld, who previously worked with SUM 41 on their videos for ‘Fat Lip’, ‘In Too Deep’ and ‘The Hell Song,’ ‘Fake My Own Death’ depicts the band performing on a rooftop in downtown Los Angeles, where all their worst nightmares –including Kim Kardashian, Michael Jordan and Donald Trump– come to attack them. Fans can watch the video now, over on SUM 41’s Facebook page.

‘Fake My Own Death’ is the first song taken from SUM 41’s forthcoming album, 13 Voices, due out October 7th via Hopeless Records. Singer Deryck Whibley shares his thoughts behind ‘Fake My Own Death,’ “I just wanted to get away from everything that I had been doing. I needed to start a new life—like faking my own death.” The ten-track album marks the band’s first LP in five years, following up 2011’s Screaming Bloody Murder, which featured the Grammy Nominated song ‘Blood In My Eyes.’

With the upcoming release of this album we see SUM 41 as an impenetrable unit putting everything they’ve got out into 13 Voices. The result is a dynamic, impassioned collection of melodic, guitar wielding, rock songs. “I can’t say whether this is our best record or not, as I don’t know if it is,” states Whibley. “All I can say is I did the best I possibly could during the toughest period of my life”.

Whibley began writing for 13 Voices immediately following his four-month stint in the hospital. The frontman recalls, “I had to learn how to do everything again-my motor skills, learning how to play guitar again… I couldn’t even walk at the time. It was really difficult, but at the same time if I didn’t have a record to make, I don’t think I would have recovered as quickly. Writing music gave me a purpose. I had to get better.” As Whibley’s health improved, so did his ability to write songs, and 13 Voices soon began to take shape being recorded, produced and engineered by Deryck Whibley at his home in Los Angeles.