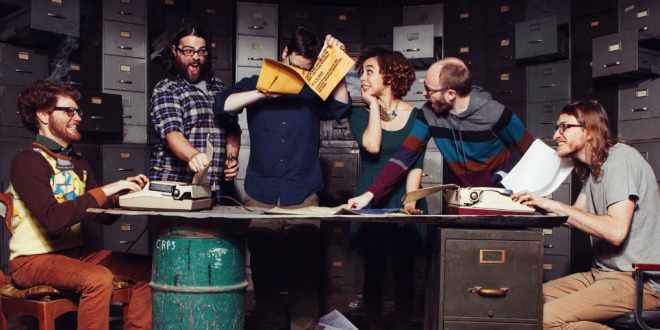 Little Tybee‘s eponymous fourth album (out June 3rd on On The Grid Creative) is by far the group’s most ambitious work, and fully crystallizes the Atlanta sextet’s brand of dynamic and multi-layered dream folk. Named after a small island off the coast of Georgia, Little Tybee have been a mainstay in Atlanta’s burgeoning music scene since they formed in 2009, and have developed a cult following for their celebrated live sets (the group has opened for acts including Kurt Vile, Of Montreal, Maps and Atlases, & Hundred Waters). Little Tybee “have been developing their genre bending sound over the course of nearly seven years, three albums, and countless tours across the States,” and according to Vice’s Noisey, “it’s time to start paying attention.”

The bulk of Little Tybee’s compositions begin their life as delicate creations, etched around the sinewy acoustic guitar and lilting vocals of singer-songwriter and band leader Brock Scott. The songs are then fleshed out by the eight-string guitar virtuoso Josh Martin (endorsed by Ibanez & Dunlop), classical flare of Nirvana Kelly‘s violin, deep pocket grooves of Ryan Donald‘s hook-laden bass and Pat Brook‘s gospel tinged beats, all rounded out by Chris Case‘s driving keyboard arrangements. By blending elements of Folk, Psych, Jazz, and Bossa, Little Tybee have created a genre all their own, both creative and technical, soothing and bombastic, which rewards repeat listens.

In support of the album the group will head on a 40+ date tour of the United States & Canada, including headlining shows at Brooklyn’s Rough Trade, Los Angeles’ The Edison, and Nashville’s The Basement.