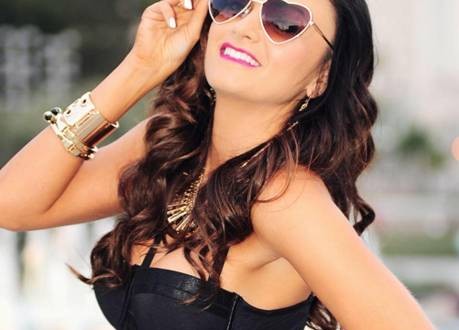 EDM themed music, along with country and rap, has ruled over the mainstream music scene for a number of years. The reasons for their long standing dominance are numerous, but the decline of rock guitar and other older forms has its own complex reasons. One important reason in their continued dominance is how the best in the genre have long since learned to incorporate rock songwriting aesthetic, but more importantly, genuine rock and roll spirit into their music. Los Angeles based singer Lexxica embodies that ideal. While her new song “Hearts Collide” pounds and percolates with all of the high gloss electric power that dance music can bring, it romps with tangible attitude and her voice snaps off with words with a bracing fever far, far older than any EDM track. Lexxica has, likewise, drafted a number of genre heavy hitters to help expand her sound in the wake of a successful debut EP. Her soon to be released follow-up is harbingered by this track and the production and vocal approach have gotten even better than before.

There’s so much variation in Lexxica’s voice. She inhabits the track in a way few vocalists working in her area do and, despite singing about a relatively limited situation, embodies the breathless passion and yearning in remarkable ways. The accompanying music far exceeds that mood and, after a brief preamble, barely seems able to restrain itself. It hinges on a pair of climatic moments and some brief, softer sections, but when the percussion is thumping away at full tilt, the music sounds like an unstoppable force.

The song’s lyrical content keeps things largely general in an effort to connect listeners better to her personal experience. One of Lexxica’s avowed intents as an artist and performer is to offer music that connects with people’s own lives and experiences in a meaningful way. This isn’t as easy as it sounds. If Lexxica grounded the song’s details in her personal life, it’s natural that such a wok would be less accessible to us instead of her touching on the commonalities uniting us all. We all share a common frame of reference and the best artists in any field take advantage of that. Lexxica shows little to no hesitancy tackling the lyric and her confidence adds much to the song.

Her debut met with much acclaim and her profile has only expanded since. When an artist is willing to put in the time and hard work necessary to prompt that desired for career ascension, the final piece of the puzzle becomes talent. Lexxica has that in abundance. “Hearts Collide” shows a performer of deceptive simplicity and hidden depths who is able to tell us something about her and the life she lives while appealing to the longings that tie us all together. This is a powerful introduction for novices and a real treat for Lexxica’s existing fans.