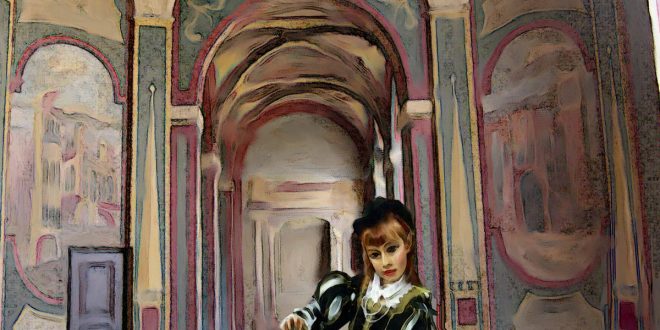 Boston based musician and songwriter Clash Bowley initially plied his trade during the halcyon days of the 1970’s before dropping out of the music world. He pursued a different path divorced from the music scene for the next three decades before buying a guitar in 2016.

Relearning his art proved to be a steep learning curve, even for an onetime everyday musician, but reacquainting himself with guitar blossomed into new songs and, soon, albums. His prolific output includes two albums in 2018, four in 2019, nine in 2020, and an astonishing dozen releases in 2021. He’s written the music for each one, much of the lyrical content, sings everything, and plays every instrument excepting the drum machine providing each track with percussion. His latest effort Elizabethan Age features a dozen of his best songs yet, only one running over three minutes long, and the concision he brings to the work is a major reason for its success.

“Fear” begins the release on a memorable note. Bowley throws down the gauntlet with a challenging performance. The rhythm driving the track anchor a chaotic, yet always coherent, track approximating the song’s subject. It sounds and feels claustrophobic. His vocals are laden with post-production effects though they never obscure the lyrics. Bowley’s writing has lean focus without ever sounding incomplete. “The Great Escape” is the album’s second track and could scarcely be more different than the first song. It has a strong backbeat and eschews the effects-heavy approach of “Fear” in favor of a clean, yet muted, approach. There’s a personal slant in the lyrics without it ever sounding overtly autobiographical.

Post-production effects are a key part of the track “Goin’ Radical”. There are strong rock leanings in this track though Bowley never goes in for the predictable. Instead, a sleek rhythm propels the song forward and the instrumental attack has plenty of punch while staying nimble from beginning to end. “Darkening of the Sun” is another exemplary track. The vocal returns to clean territory and the nasal quality of his vocal nevertheless has enormous personality. The same sleek demeanor defines the arrangement though its far less cluttered with the post-production effects than earlier performances.

The unbridled emotion underlying “Not There” gets to the heart of Bowley’s music. His intensely human songwriting has a poetic veneer that doesn’t strike a false note and elevates life’s gritty realities in an artful and honest way. Bowley puts his drum machine to excellent use throughout Elizabethan Age and “Not There” benefits a great deal from a compelling yet understated rhythm. “Notes to Self” bristles with withering self-contempt yet never devolves into an unpleasant listening experience. His personal observations are unsparing and the vocal complements that with its relatively deadpan delivery.

The closer “Seled” is full of Biblical references and placing another nominal love song within such a context lends it improbable rhetoric that nevertheless works. His meditative vocal raises the lyric and gives it the flavor of performed poetry. Elizabethan Age is a work brimming with intelligence and musical imagination, yet it’s accessible throughout. It’s the latest triumph for a songwriter who has honed his craft to a sharp edge. Listeners will be glad to bleed a little for these songs.