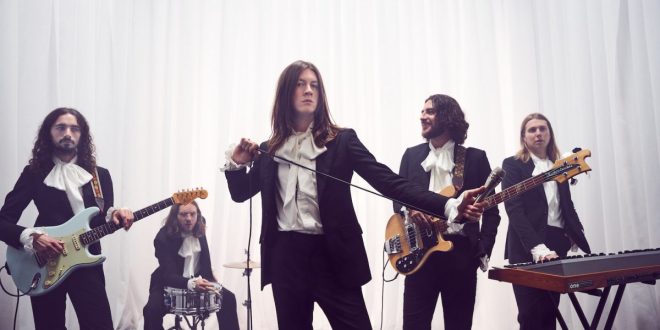 Today, British indie outfit Blossoms announced their brand-new, fourth studio album Ribbon Around The Bomb, which is set for release on April 29th. Coupled with the album announcement, the band have also shared the title track from the album and its accompanying video, directed by Edwin Burdis, Arctic Monkeys’ Creative Director, who worked on the band’s Tranquility Base Hotel & Casino and AM albums.

“Ribbon Around The Bomb” offers fans the first taste of new music from Blossoms since their “Care For,” which was released last year. “Care For” gained great support from radio at home in the UK, with the track being playlisted and made the ‘Hottest Record’ by Radio 1, as well as getting on the B-List with Radio 2.

Speaking about the new album and single, Blossoms’ Tom Ogden reveals, “While on tour in 2019 in Mexico, I visited Frida Kahlo’s house. Looking at her paintings on show, someone had described one of them as being like a ‘ribbon around a bomb’. I immediately thought that it was a great title for a song and album because of the imagery that it evoked in my mind. I thought about how lots of things in life could be described as being a ribbon around a bomb in the sense that as people we often dress things up which have a darkness lying beneath them.”

Blossoms are currently gearing up to play a series of live shows and festivals in the UK this summer as well as a run of support dates with The Killers. North American tour plans for the Stockport five-piece are currently in the works following successful SOLD OUT headline runs in 2019 and 2017 — including critically acclaimed appearances at Coachella Festival in California and Lollapalooza in Chicago. Stay up to date on all Blossoms live dates by visiting www.blossomsband.co.uk/tour/.