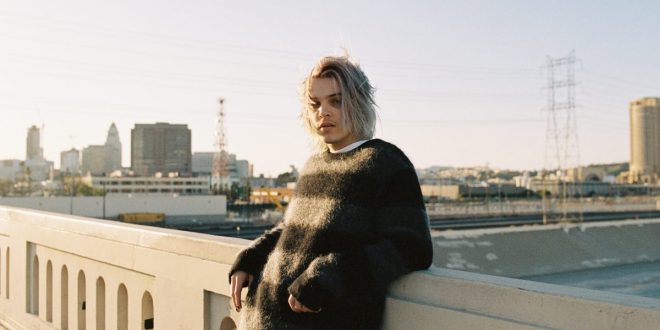 After growing a steady fan base independently, 44phantom recently signed a major label deal and has since been knocking on the door of pop music stardom. He was raised all over the United States and credits his genre-blending sound to his wide ranging span of influences, who include everyone from Kurt Cobain to Carrie Underwood and Drake. Labeled as “grunge-pop,” 44phantom has seen a spike in his generation-z following and shows no signs of slowing down anytime soon.

Music Existence: One thing that stood out in your bio was that you’re “Oklahoma-born, now based in LA, by the way of Seattle and Nashville.” How have all those geographical locations played into your sound?

44phantom: I do have a country influence just from growing up in Oklahoma, but Seattle really got me into grunge music just because it’s where I came from. My dad always loved it and just everybody talking about it all the time, I got pretty into Pearl Jam and Nirvana. It added an edge to my music that I feel like really wasn’t there before. Just the spirit of not really giving a fuck, you know? Kurt Cobain didn’t give a fuck. Eddie Vedder really didn’t give a fuck. So it kind of just inspired me to not care as much about rudimentary things and I feel like that really came across in my music.

ME: What about growing up in Oklahoma? Was there a scene that you attached yourself to?

44phantom: Growing up, even when I was really young, like four or five years old, my older cousins had a pretty popular local band and they’d do shows around the area and stuff. So I’d always go to those and perform with them. In terms of a scene, that’s probably the only one I really did attach myself to, but it really got me hooked on it from a young age.

ME: You’ve been labeled as a “grunge-pop” artist which we’ve seen a lot recently with Yungblud or newer artists like renforshort, but what is it about that rock sound from the 90s in Seattle that pairs so well with modern day pop music?

44phantom: That’s a really good question. I think probably just the fact that the 90s was kind of a collection of what had happened in 70s rock, 80s rock, but then it kind of had a pop crossover and radio play became so important. Now we’re in this point where radio kind of died a bit, but now streaming is a really big thing…. I think probably what makes it combine is just that people are finally finding a way to mix it with pop again, same thing they did with pop punk. But honestly it’s probably just because everybody’s dad listened to that music growing up.

ME: Do you worry about fitting into a certain lane?

44phantom: Not even a little bit. It annoys me that that’s how it is now with some people, but the genre was made to guide the listener, not the artist. Like if I’m just trying to make something and if somebody wants to call it a rock song, or a pop song, or a hip hop song, I don’t give a fuck. Whatever it takes for you to go ahead and listen to it, go for it. If you have to call it this to make yourself feel better, go for it. If you want to call it this, go for it. I just make the song and however it comes out, it comes out.

ME: You found a lot of success as an independent artist doing everything on your own but now you’ve signed to a major label. How has that jump been for you, transitioning to working with a bigger team with a lot more people involved.

ME: Your latest single “don’t fall” just came out. What was the inspiration behind that song?

44phantom: I kind of got to this point where I felt like being in a relationship was probably not a good idea for me. I didn’t want to put somebody else in a position where I can’t really give a 100% of myself to them because of everything I’m doing. It’s basically just about that. But now I have a girlfriend so it’s going okay! I’m figuring it out.

ME: Is there any nerves or anxiety with releasing such a personal song like that?

44phantom: Honestly, not really. I feel like I would feel a lot more nervous if I was about to drop something that I thought was really corny and cookie cutter. I feel like if I’m just being honest in a song that’s all I can ask of myself.

ME: You also just released a video for “don’t fall.” What’s the collaboration process like when you’re working with directors?

44phantom: I do really want to trust their vision with it. If I don’t like something, I’ll tell them but I mean it’s really their job to just come up with a bunch of ideas and then kind of see what works. I mean, even the last one I said it needed to be very cinematic and dark with bright colors, and they kind of nailed it.

ME: Now that things are opening up and touring is looking more likely, have you thought about what it’s going to be like crafting a live show?

44phantom: A hundred percent. I mean, I do most of my music now with live drums or live sounding drums. I personally, I just think it gives a song the most energy anyway. But yeah, I want to have just a crazy live show!

44phantom’s new album die sometime, it’s good for u  is out now.

Interview has been edited for publication purposes.