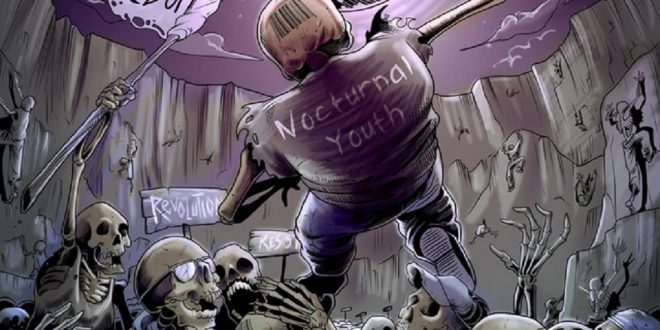 When the opening notes of Pistols At Dawn’s latest EP Nocturnal Youth burst onto the scene, listeners are immediately made aware of the treat that awaits them; the opening track and first single “Voices” deals in heavy harmonies and a great amount of instrumental strength, both in the band and the lead vocals backed by a growling force of backup vocals. The chorus comes across as a fairly simple ingredient in an otherwise dense track, and it’ll undoubtedly end up stuck in your head with the rest of the melodies contained within Nocturnal Youth.

In the second track “Crown,” listeners are given another knockout track that was also initially released as a single following up “Voices.” The song is arguably Pistols At Dawn at their best, inevitably primed for rockstar-dom with the overall structure of the track. The melodies are once again undeniably catchy, and the attention to the various segments within the track make “Crown” a superior track to most anything coming out of melodic hardcore or rock music elsewhere in modern releases. The stakes Pistols At Dawn seem to be laying claim to with this track, calling out ruinous, hollow rulers feels multi-faceted; there are obvious connotations and references to the modern political landscape and overall state of the world, but coming from an ambitious band on the rise makes me curious if there’s not at least a small angle of the song aimed at those seen as current reigning champs of the rock genre. The overall tone of the track makes me envision heads on stakes, and an unbreakable line in the sand; the promise of this song blowing up feels all but guaranteed.

“Now Is the Time” continues the trend of giving a shamelessly brash and hyper-confident battle cry within its chorus, but shifting the overall tone from something heavier to a, more or less, the light track gives the four-song EP a great sense of balance. This track feels like a solid entry but following two blow-out hits, doesn’t deliver as much on overall star performance as you might hope. It still never dips to becoming flat-out filler, however, and without this track the EP might otherwise feel too aggro or overwhelming in its approach.

Nocturnal Youth makes the great choice of ending on “Gone Black,” a beat-for-beat phenomenal send-up to the EP’s various stylistic choices and range. The bridge about two minutes into the track is an incredible piece, quite possibly the standout segment from the entire project, and it delivers on the theatricality needed to fully pull off something of this caliber. There’s no doubt that the future of Pistols At Dawn is safe and secure within the consistently unchanging rock music soundscape, with what some might see as daunting challenges ultimately feeling entirely non-threatening in light of the band’s immense certainty and ice-cold eagerness. The overall direction of the band is hard to assume without a fully fleshed-out LP to base judgment on, but if the jump from their eponymous 2019 debut to Nocturnal Youth is any indication (and it absolutely should be), whatever comes next should somehow be even larger and primed for a fight.

Previous Interview: Meet 44phantom, the Newest Addition to the Grunge-Pop Phenomenon
Next Interview With H.I.M. Woof