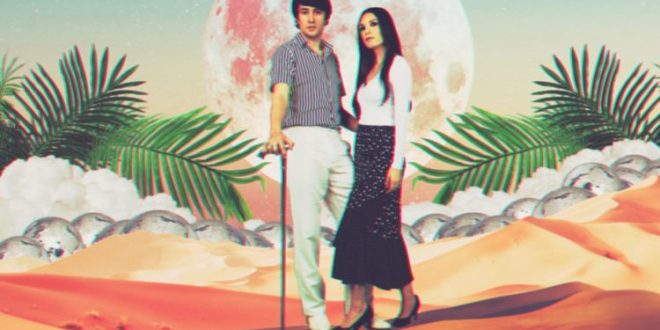 Single Review: Moonray – “When You’re Around”

Austin, Texas husband-and-wife duo Moonray keeps the love going with their dreamlike blend of romantic themes and serene synthpop tones. In the months since their debut EP, Honeymoon, was released, the cathartic energy provided by Jonray and Barbara Higginbotham’s music has taken on a more resonant purpose, especially with the bleak, looming effects of Covid-19. Their latest single, “When You’re Around,” has gained the most traction of their releases thus far.

From its opening digital drum fill, the song promptly initiates a sweet, kitschy, and somewhat muzack-oriented instrumentation, given a dose of depth by the pacing of a crisp acoustic guitar. The vocal tonalities of both Jonray and Barbara are not only well-blended components within the involvement, but shine individually as synth parts in themselves. At the song’s halfway point is where a tonal shift occurs, as the wailing, fuzzy electric guitars add a kind of humorous edge, and a nuanced glimpse of their stylistic branching out at the same time. Times have definitely changed since Moonray debuted last year, but the poignancy of their music continues to be spread, in conjunction with their message of light, love, and life.

I come from a family who is passionate about all things music. I learned to sing at an early age, and by 13, had my very own Fender Strat guitar. I tried my hardest at learning all that I could. Because I was born with cerebral palsy, I had to teach myself an adaptive playing style. I learned to write and record my own music, despite these difficulties. In college, I started making great use of my writing abilities by reviewing music, as well as copy editing. I guess it's best to stick with what you know, while welcoming a fair challenge at the same time.
Previous Dirty Honey Continues to Find New Recording Ways Despite Pandemic Restrictions
Next Single Review: Vixu – “Jackie”