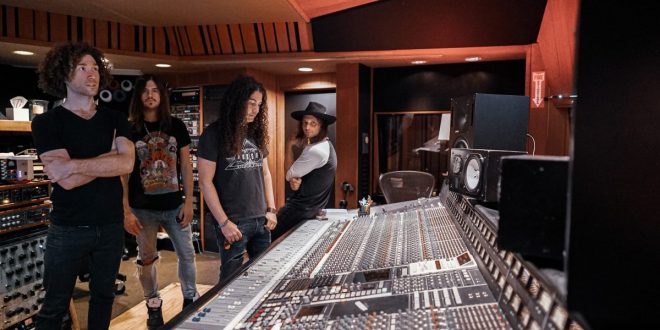 LA rockers Dirty Honey have continued to find new ways to create music despite global travel restrictions preventing the band from recording at their desired studio in Byron Bay, Austrailia. While the band had tickets booked to head down under last March, American travel restrictions had other plans, forcing the boys to get creative.

Wanting to stick to the status quo, Dirty Honey insisted on recording with veteran producer Nick Didia (Rage Against The Machine, Bruce Springsteen) who produced their record breaking debut EP Dirty Honey last year. This time, Australian-based Didia will being joining the band via Zoom, while the band works in a LA studio to record their next release.

Lead singer Marc LaBelle gave an update on the process and explained how recording remotely was going well.

“Back in March, we had a handful of songs that were in various states of completion but now, not being able to tour, we’ve  had the time to finish them, feel really confident about them, and write more.  We’re going into the studio with twice as many new songs as we had back in March. The pre-production for this new music has been handled exactly the same way as it was for the EP;  Nick was in Australia, we were here in Los Angeles, and we were sending demos back and forth.  Recording the music remotely is what’s different this time.  But Nick brought in Brendan O’Brien’s engineer, Tom Syrowski (AC/DC, Chris Cornell), who’s been in the room with some incredible artists, so it’s going to be great.”

After securing touring gigs with everyone from Guns N’ Roses to The Who, Dirty Honey spent the beginning of the year headlining their own shows across small venues in North America. Songs from their debut EP have racked up over 10 million streams on Spotify alone and their single “When I’m Gone,” went to No. 1 on the Billboard Rock Charts. Stay tuned to Music Existence to stay updated on all things Dirty Honey.