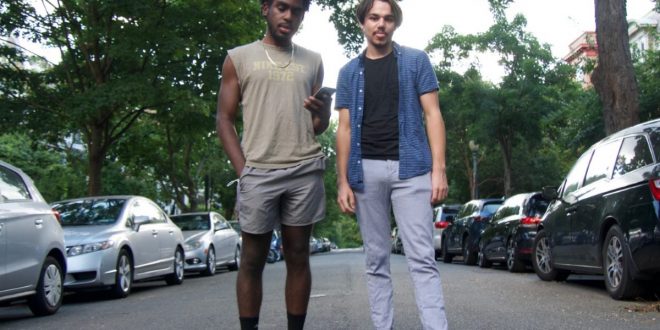 Washington DC alt-pop duo Artdei (pronounced “Art Day”) are getting a head start on Halloween with the release of a psychologically thrilling new music video for their single “Kawhi.” The track is off their debut EP Don’t Worry, which was released September 25th

Artdei vocalist David White (AKA DWhite) and instrumentalist David Della (AKA Della) are both heavily influenced by the horror movie genre and used that influence to illustrate the feelings of energy and tension heard in the single. The brief, wordless narrative is an enthralling story that keeps you guessing until the very end.

“The music video idea came purely from the imagery provoked by the atmosphere and sound of the single,” says Dwhite.

Somewhere between the worlds of hip hop and bedroom pop, “Kawhi” was originally an old beat that Della created and archived. DWhite found it by accident while looking through old files and brought it back to life, with an intense vocal and lyric performance perfectly matching the heavy futuristic synth and powerful drums.

The title draws from DWhite being inspired by the unmatched athleticism of the basketball player Kawhi Leonard. “I’d like to note that this track was produced before Game 7 vs. the Nuggets, but he is still a two-time finals MVP so whatever,” says DWhite.

Art in all forms plays a significant role in the lives of both DWhite and Della, so much so that they dedicate full days to playing music, painting, and reciting poetry. The first “Art Day” commenced in Summer 2019, as the group took the roof to make music in the sweltering Washington, DC heat. Art days are meant to represent moments of reflection and disconnection from the busyness of everyday life. “Now more than ever is it imperative that you pour energy into activities that give you joy, which is precisely how Artdei was birthed.” says DWhite

Artde released their first single titled “Like That” on July 10th, 2020. Since then, the duo has released a number of music videos and comedy sketches (including an ode to the “Cholula Hot Sauce Girl”) with intentions to create a YouTube presence in addition to their musical aspirations.

Listen to the single “Kawhi” off their debut EP now on Spotify.