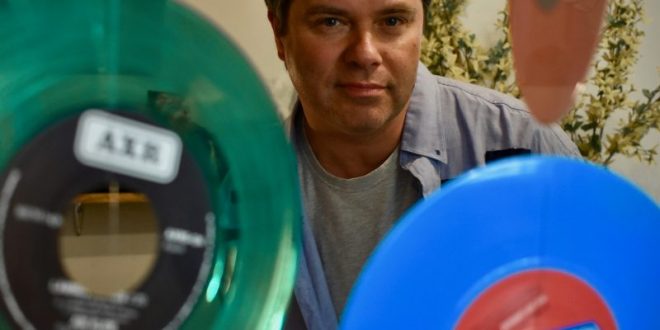 Tom Tikka is living two lives these days.  Three, if you count his personal life.  The husband and father of six also fronts the chart-topping band, The Impersonators.  When he’s not doing that, he’s also got his own solo project, Tom Tikka & The Missing Hubcaps…another chart-topper.  With a couple of EPs out this year, you could say that Tikka is a very busy man.  That’s why we’re thrilled to have this exclusive interview with the prolific singer-songwriter…

Thanks for taking the time for an interview! We are honored to be speaking with such an incredible songwriter and musician. What inspired you to follow your chosen career path as a musician?

Well, I always loved music. Even as a very young guy, I must not have been more than five or six, I would sit next to loudspeakers when my parents were listening to music. My mom was afraid that this would damage my ears, so she’d always ask me to go sit somewhere else and I’d begrudgingly oblige. That’s how into music I was even then. It made sense to me. It’s hard to explain. I felt I was completely one with it.

My decision to become a songwriter was solidified when I heard Paul Anka for the very first time. Tracks like “Lonely Boy”, “Adam And Eve” and “Crazy Love” just moved something within me and I knew I wanted to write songs. This was when I had taught myself how to play guitar a little bit. It grew from there. I remember writing a song called “Coca Cola Song”. I still recall the tune, which is odd because I was six when I wrote it. It’s not a very good song, I’m afraid, but it was a start.

The decision to go into music as an artist came a bit later. I was in my teens and watching reruns of Elvis and Beatles movies. These guys always had beautiful women running after them, so I thought being a “rock star” would be a much cooler profession than just about anything else. It’s strange how limited the thought process of a fourteen-year-old is. Oh well, I wouldn’t change anything. Of course, later on I fell in love with record production and the recording studio and obviously, that’s why I stuck with music and have now spent about twenty-five years honing my craft. But yeah, in the beginning it was the chicks that made me get up on stage and play.

Was there any one event in your life that led you to record your latest project, “Insane?”

I suppose the Insane EP came out at a time when I was finishing nearly a yearlong period of going to therapy on a regular basis. This obviously had a huge impact on the five songs that make up the record. I could say the same thing about the Working Class Voodoo EP that was released a few months prior in late May.

The name of the new EP is very much a tongue-in-cheek type of stab at the older generation, or my mom and dad’s generation, to whom going to therapy meant that you are insane. Their tactic was to run yourself to the ground. As a matter of fact, even going to the doctor was a bit difficult for that age group. My dad used to say that he’ll go to the doctor when his legs fail him and not a moment sooner!

Anyway, when I told some of my older relatives that I was seeing a shrink, you could see in their reactions that they thought that I’m a mental case. I didn’t mind that at all. I knew what their response would be. It’s too bad though as I feel some of them could have benefitted from therapy a great deal over the years. However, that’s not my call to make. As far as I’m concerned, if you are depressed and down in the dumps, you can either pick up the phone and make an appointment with an analyst or you can grab a bottle of whiskey and self-medicate. I have six kids, so the latter was never an option for me.

I can’t pick just one but if I were to name two, it’d be The Beatles and The Beach Boys. In terms of harmonies and arrangements, you can’t really do better than those guys. I listened to The Beach Boys’ album Friends a few weeks ago. It completely blew my mind. It has one of my favorite Beach Boys tracks, “Little Bird”. Love it!

Well, everyone that I come in touch with every day but obviously, the person that influences me the most on a daily basis is my wife. You show me a married man who isn’t influenced by his wife every day and I will show you a river that flows upstream. It’s as simple as that.

In my case of course, my wife is also my collaborator quite often, not on every song but on the ones where I feel a song needs something, a little snippet of a melody or perhaps a riff I wouldn’t usually write. The Impersonators’ next single “Rodeo” is a good example. The wah-wah guitar riff that I play is written by my wife, as is the middle-eight. She uses notes that I wouldn’t necessarily use and that usually makes the song more interesting.

She also creates The Impersonators’ and my music videos. It’s a great thing to have someone like that at home.

Well, the EP came together rather quickly. The Impersonators were on a break and in the meantime, I decided to put out a few solo tracks. Some tracks, like “Driving Me Insane” and “Sweet Sugar” were already mostly done. I replayed parts of them and added a few bits here and there but those didn’t take that much time to finish, a few hours at best.

“Good Ol’ Stupid Me”, “Summer Means New Love” and “Dismal Day” I recorded from scratch. In terms of songwriting, “Summer Means New Love” is the only newly written track on the release. The other ones had been around for a very long time. Well, the melodies of the other ones had been around, the lyrics are all new. Given that I play and sing everything on the record, the recording process was pretty much me building the tracks one instrument at a time. Yet, it was very exciting. As this was going to be a solo release, there were no preset rules as to what the EP was going to sound like. I could add anything I wanted. In “Summer Means New Love”, for instance, I got to play around with sounds and the arrangement a bit. I was in no panic to produce a single, so I could experiment with the song. I quite like the way it turned out.

Out of these alternatives, I suppose critical praise. That’s the most important thing since it’s connected to bringing people joy with music. This has always been my goal, to move folks with my tunes. I’ve often said in interviews that it doesn’t matter if my audience is a huge crowd or just a few people. Whichever is the case, I’ll give the performance all I’ve got. If I can make the audience forget about their daily worries for even a few minutes, then I feel I’ve succeeded in my job. Hence, the importance of critical praise. It means that I’ve made somebody happy with my music.

I have six kids, all boys, so you can imagine that I don’t have a lot of hobbies. It’s their hobbies that take the priority.  I drive them around. I’m a chauffeur. Somebody always has some practice or something somewhere. Being a father to that many kids can be a tough job at times but it’s also the greatest thing in the world. I love watching my sons grow.

In terms of my own hobbies, I go for a run a few times a week and do sit-ups and pushups every morning. I try to keep myself in shape. This is the only thing that I really have time for as far as hobbies are concerned. Well, I enjoy cooking for the family. It’s something I’ve done all my life and something that I’m actually pretty good at. Yesterday, I made Chicken Kiev and the other day Sirloin steaks with baked potatoes. I suppose cooking is a bit of a hobby. In fact, I know it is.

I don’t know when this interview is going to come out but I am writing this in mid-September, so the release that’s coming up right now is The Impersonators’ next single, “Rodeo”. It’ll come out on October 2nd. There will be one more release from me after that before the year is out and it’ll be a Christmas release by Tom Tikka & The Missing Hubcaps, a song called “Just Like Xmas (Love Is War)”. It was a lot of fun to record, albeit a bit weird since the song had to be done by the end of the summer to get it out in November. It was one of the hottest days in August when I laid down the vocal track for “Just Like Xmas”.

Oh I almost forgot, 2021 will be a very exciting year for me. In March, The Impersonators are going to release Ghost Town Radio, our first full-length studio album, and The Missing Hubcaps will put out an EP or two or perhaps even an album. Can’t wait!

The Impersonators’ Josie Awards nomination was nice, and I’m also pleased with the wonderful reviews that I’ve gotten with The Missing Hubcaps. There have been a whole lot of highs.

However, for me personally, releasing the two solo EPs Working Class Voodoo and Insane has been a milestone. Just getting it all done. Getting it all recorded and finishing it all up by myself. I’m proud of those two releases. As far as I’m concerned, they contain some of the best songs I’ve ever written. 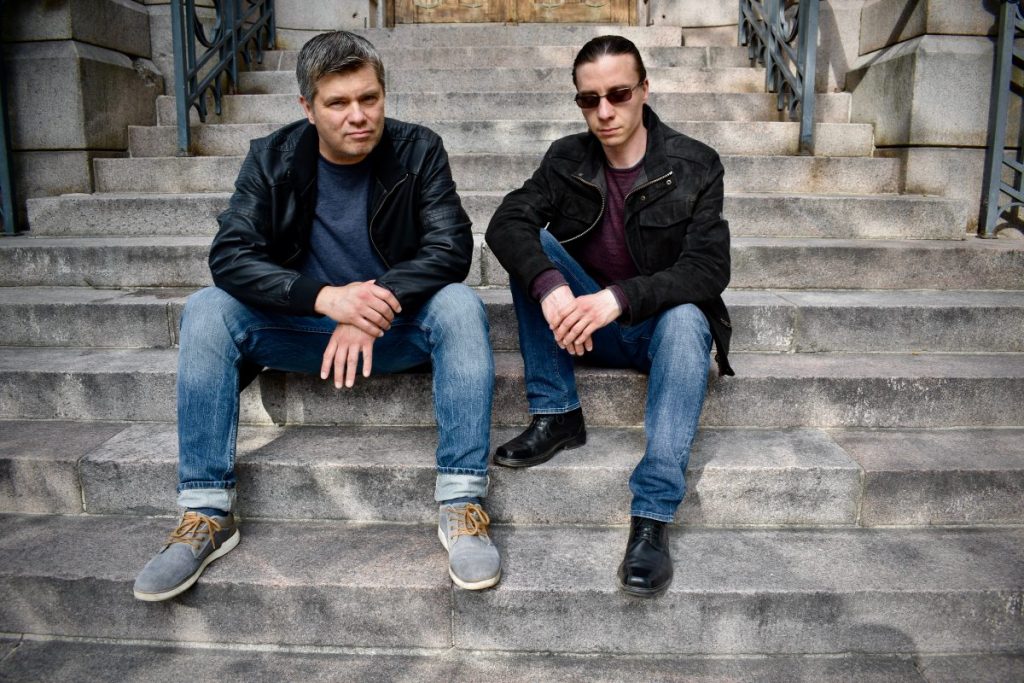 Do you ever get stage fright? Any place you’d love to perform that you haven’t?

I suppose I still get stage fright every once in a while if I do something I haven’t done before. I don’t get it like I used to. I guess I’ve climbed up on stage a few too many times. However, the element of nervousness is always there and the bigger the audience, the more nervous you are bound to be.

Once the first song goes just fine, you tend to relax. That’s how it works for me anyway. About places I’d like to perform, I’d love to play the Cavern Club in Liverpool. If that ever happens, I’ll have stage fright, no doubt about that!

Enjoy life. Remember, it all goes by much faster than you’d ever expect. I’ll leave you with something Abe Lincoln once said:

And in the end, it’s not the years in your life that count, it’s the life in your years.