Home / Headline News / Live Review and Gallery: The Adicts, The Krays, The Droogettes and Mick’s Jaguar at Gramercy Theatre in New York City 1.16.20 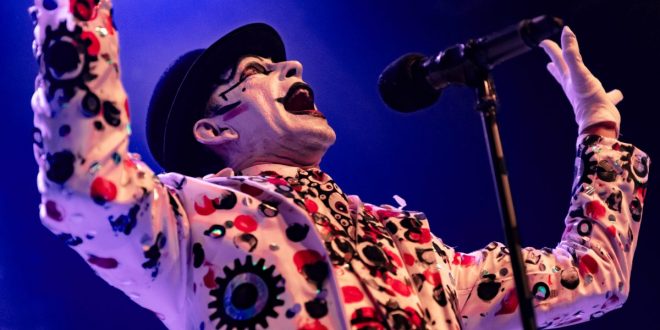 The Adicts are an English punk band that formed in 1975 in Ipswich Suffolk England. Since forming The Adicts are known to be the longest running band in punk history with almost an entire original line-up of band members, which for over 40 years under their belt is something pretty amazing.

Thursday, January 16, English punk legends The Adicts brought their onstage antics to Gramercy Theatre in New York City. With The Adicts having only played five shows in New York City between the period of 2011 -2016, before having two different periods of inactivity, it would be safe to say The Adicts probably haven’t played New York City since the early to mid 80’s. With this night being long overdue for fans in New York City it was certain that the show would easily sell out and of coarse that it did, actually I was rather surprised that the show hadn’t been sold out prior to the night of.

Kicking off the night was a local band from the city, Mick’s Jaguar. To be the band that opens a show is always tough and you need to fill some pretty big shoes, to be a band opening a show in New York City is even tougher, but to be the band that kicks off the night for The Adicts, a band New York City hasn’t seen in six years, those are some really extra big shoes to be filling. Having been compared to bands like Thin Lizzy and Sex Pistols, the band has even been described by press as “AC/DC playing CBGB”, much like The Dictators, Mick’s Jaguar blends hard rock and punk with that 70’s flare. Straight out of the gates Mick’s Jaguar unleashed onto the crowd a slew of grimy riffs and ripping solos that were shared between three guitarist that shook the stage along with frontman John Martin‘s vocals that have a perfectly gritty blend of blues mixed with an aggressive heavy animalistic rock sound thats backed by the relentlessly catchy drums and the smooth grooving bass that filled those big show opening shoes. Not knowing much of anything about Mick’s Jaguar going into the night, I was happy to see such raw energy live on top of some good’ol sleazy rock, with both Mick’s Jaguar and myself being local to New York City I look forward to catching them live again.

The second band on the bill for the night, fittingly booked having already toured with The Adicts, was A Clockwork Orange themed all female oi band based out of Philadelphia called The Droogettes. Taking the 7 Seconds song “Not Just Boys Fun,” thats exactly just what these ladies did, with the energy high playing fun catchy oi punk with sing along choruses. While throwing punches and high kicks, vocalist Jen Reiling‘s powerful and aggressive voice paired with Elija‘s more brash backing vocals and buzzing guitar licks along with Rachel Starlett‘s bass and Ginger Knight‘s drums that are a bit more traditional, together, to me gave the music a sweet and unique edge with some bounce to it, unfortunately that still didn’t seem to get the attention of the crowd that had still remained dormant since the start of the show, even throwing down an awesome cover of The Misfits “Skulls,” personally got a little chuckle out of the cover seeing as The Droogettes are from Philly and The Misfits just played Philly a month ago, anyway, that still couldn’t bring the crowd to life. I always get down on seeing a crowd that doesn’t appreciate a good solid set and thats just what The Droogettes delivered.

Holding down the direct support slot, was another band local to New York City, The Krays. Bringing a true street punk style to the stage, The Krays are straight up “all killer, no filler,” The Krays come out hit the stage straight in your face, with no bullshit. Not wasting any time getting right down to business, being ready ahead of schedule The Krays started their set early after vocalist Johnny Kray asked bandmates “you guys start now? are you guys ready? we still have time!” Johnny then went on to comment “fuck it lets now, nobody wants to stand around looking at us just standing here.”  By this point security had begun to move the barricades closer to the walls to fit the crowd that had began bulking out from fans coming up from the downstairs lounge area, it was clear at this point, the show was definitely sold out even may have been over sold along with a heavy presence from those on the guest list. The Krays were the band that finally got the dormant crowd fired up and the pit started.

Finally it was the time everyone had been eagerly awaiting for the entire night, The Adicts were about to take the stage in New York City for the first time in four long years. Que “Beethviana” the theme song to Stanley Kubrick‘s A Clockwork Orange (composed by Wendy Carlos and, based on the choral movement of the Ninth Symphony by Beethoven) and there’s an uproar of cheers from fans, as drummer Michael “Kid” Dee stands behind his kit overlooking the the sold out crowd in New York City, followed by his brother and lead guitarist Peter Dee, rhythm guitarist Highko Strom, and bassist Kiki Kabel, all appropriately dressed in droog attire, all take position on stage awaiting the grand entrance of frontman Keith “Monkey” Warren. An entrance fit for a Las Vegas magician, frolicking out from side stage, Monkey inclosed in his winged cape takes his place center stage, to the fans screaming, the charismatic frontman extends his arms out like as peacock to its mate revealing his impressive silvery wings with a flawless colorful dot pattern, brandishing his matching white polka dotted suit along with infamous bowler hat and Joker face paint, Monkey and company go right into “Let’s Go,” chaos ensued on the floor as a circle pit opened with a blur of bright colored deathhawks  and studded clothing, fans collided with each other exchanging shoulder blows and sharing in a bit of friendly violent fun amongst one and other as bodies were tossed over the barricades at high speed.  With Monkey losing the wings, with a deck of cards in his hand flinging them out to the crowd to the delight of “Joker in the Pack,” fans clawed and jump on each other for the chance to get their hands on a piece of punk memorabilia.

The fun and hijinks carried on through The Adicts 23 song set, one stand out moment was towards the end of the set during “Who Spilt My Beer,”  Monkey donning a beer mug hat resembling something someone would be seen wearing on St. Patricks Day, walks to the front of the stage removing the hat and then proceeds to pour 2 cups of beer inside before tossing the hat still with beer inside into the crowd. Other theatrical highlights that included Monkey dancing around on stage twirling a light-up umbrella, throwing confetti and shooting water guns into the crowd, musical highlights included songs like “Numbers,” “Fuck It Up,” “Gimmie Something To Do,” “Chinese Takeaway,” and “Viva La Revolution.” The biggest highlight of the show for everyone seemed be the show closing cover of Beethoven‘s “Ode to Joy,” which included giant inflatable beach balls being tossed around the crowd.

The Adicts truly are a fun and great band live. It was really a delight getting the chance to finally see them live in New York City, as I said before, since the early to mid eighties, The Adicts have only played New York City five times between 2011-2016. Who knows for whatever reason I wasn’t able to make one of the three shows of the 2000’s, I know I was to young for the shows in the eighties, I finally got my chance to seee The Adicts live on this night and thats what really matters.

NewYork Based Photographer. Music Enthusiast with a background in Graphic Design. Whether I'm shooting a live event or just out wondering the streets its about capturing the moment.
Previous Singer/Songwriter Jonathan Emile releases ‘Spaces-In-Between’
Next In This Moment Release First Single and Video for “The In-Between” from Upcoming Album ‘Mother’ 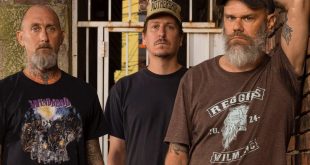