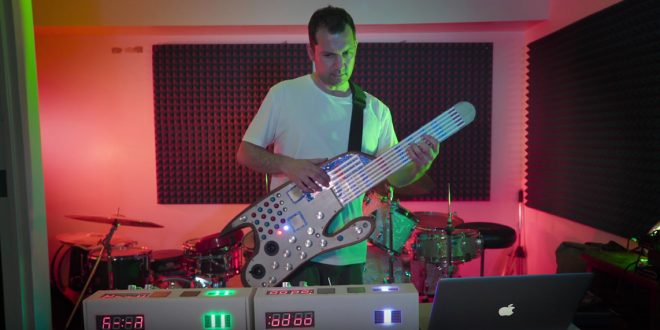 Pyramidi Scheme begins with the track “Message to the Moai” and makes it clear from the outset that Nick Demopoulos’ project Smomid doesn’t play by normal musical rules. Demopoulos’ interest gears itself towards exploring unusual sonic landscapes and textures rather than relying on tired popular music formulas for connecting with listeners. The overall mood of the release has a dark tint and the album’s first song is no exception, but the presence of melody does signal a mild concession to traditional fare. It’s a wont in short supply on this release, but helps add variety to what might otherwise come across as an inaccessible release.

The aforementioned mood deepens with the next track “Submerged”. The mix of lower register, bass-like computerized notes with higher register, even shrill, counterpoints offers sharp contrasts with the splashes of ambient texture worked into the composition. It is a performance possessing an unsettled thrust. A superficial appraisal of the track makes it seem like nothing is stable, everything is up for grabs, but a closer listen to the cut reveals a clear design and thematic unity of sound.

“Ziggurat” runs almost ten and a half minutes and obviously finds Smomid filling a much larger canvas than before. The darkening of the musical mood continues with this track – if the preceding recording “Submerged” has a foreboding edge, “Ziggurat” ups the ante and comes across as an outright descent into auditory hell. He doesn’t accomplish this through gaudy flourishes. The leading sounds have a synth-like sheen at many points balanced against lower register notes reverberating throughout the track. There’s almost a classical bent to the music despite its electronic origins – a close listen to this track and others reveals how Demopoulos builds the composition through a distinct series of movements.

“Pyramid of the Sun” is one of the denser electronic compositions included on this release. The tempo varies throughout the performance and generates a nervous energy capable of physically engaging listeners. The title promises something much different than what the track delivers – if this were a folk album, for instance, you would perhaps expect an uplifting pastoral track, but Smomid once again is adept at turn expectations on their head. “Gate of the Sun” continues the solar theme but has a very different sound. This is much lighter fare, in comparison, but related to the overall album sound. The relaxed qualities of this performance are a marked contrast to the surrounding performances.

“Age of Leo” ends the release on similar ground but with a much more stylized surface. The synthesizer-like sound heard earlier in the album returns for this curtain closer but is blended with expanded sonic colors and gestures towards melody lacking in “Gate of the Sun”. It is a well chosen ending for Pyramidi Scheme that varies from its more experimental inclinations while remaining faithful to the album’s guiding spirit. Nick Demopoulos’ Smomid project has accomplished something singular with this release and shows there are vast territories in electronic music remaining to be staked out by genuine visionaries.