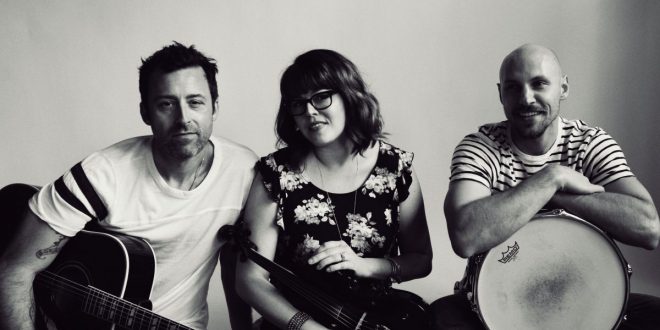 EP Review: Owls and Lions – “God Bless You & Protect You”

“God Bless & Protect You” is a memorable single from Owls and Lions’ new EP collection There’s a Light and the New Jersey duo marks its release with a well tailored video. Singer and violinist Nicole DeLoi’s partnership with guitarist and vocalist Jay Della Valle are polished musical artists who boast considerable songwriting skills both musically and lyrically DeLoi handles the bulk of the songwriting for Owls and Lions, but no one should underestimate or short change Valle’s contributions to their songs. His musicianship brings unquestionable gracefulness and substance alike to “God Bless & Protect You” thanks to five star guitar playing, most of it acoustic with a smattering of electric guitar tossed in for color, and his own first class vocals.

Their talents duetting with each other is one of the track’s abiding strengths. They engage in an effortless vocal dialogue with one another fueled by the mark NBC’s show This Is Us has left on DeLoi’s emotions and creativity. It isn’t any sort of adaptation culled from one or a group of episodes but, instead, explores some of the same themes that are the television drama’s calling card. DeLoi’s lyrics possess a light literary sheen without ever obscuring the message behind her words and she proves adept at crafting a solid narrative that never trumps the musical arrangement but, rather, works in close concert with its melodic strengths.

Drummer Kevin Walters doesn’t maintain a presence throughout the entire song but he makes quite an impact when he comes in. His percussion is tasteful and brings additional impetus to the recording without ever pushing too hard on the musical arrangement; DeLoi and Valle weave the disparate sonic strands of this track into an orchestrated mid-tempo gem that never tests listener’s patience while glowing with a warm and inviting spirit. It is all the more impressive considering the song’s running time of near five minutes.

DeLoi’s vocal cast a magic spell over me when I heard the song for the first time. There’s a transformative element in the way her voice syncs up with Valle’s but, judging her talents alone, DeLoi enchants me with genuine pathos rather than submerging listeners in melodrama. The emotions they produce via their performance are genuine; there’s no empty theatrics propelling the track forward, just unadulterated sincerity. It is a sterling recorded example of why Owls and Lions enjoy such respect from fans and peers alike.

The video caps it all off with high end production values and visual imagery underlying the message behind DeLoi’s lyrics. Much like the song, the video for “God Bless You & Protect You” depicts the memories of a relationship between a father and his daughter, but anyone who has either lost a parent or experienced a strong connection with one will relate to how well the video and track work together/ Those familiar with Owls and Lions will find much to enjoy in this original composition and, without a doubt, those hearing the duo for the first time will feel compelled to return to their music for further exploration. “God Bless You & Protect You” is a sparkling harbinger of the riches awaiting listeners on Owls and Lions’ new EP release.