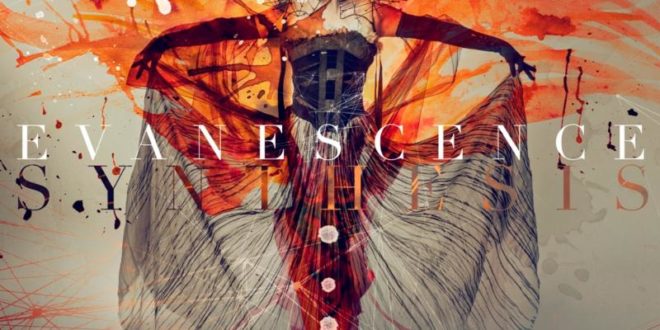 EVANESCENCE, have released the new video “Imperfection,” out today. Shot on location in Los Angeles last month with director P.R. Brown, the song is the first single off the group’s fourth and most ambitious album to date, SYNTHESIS, set for release November 10. The album is a reimagining of some of EVANESCENCE’s best-loved songs-as well as a couple of new ones–recorded with a full orchestra and electronics combined with the band and AMY LEE’s virtuoso piano and voice. Watch the behind-the-scenes video story and band interviews from Revolver magazine, HERE.

AMY LEE describes the concept of the video for “Imperfection,”“This collaboration with P.R. Brown has just gotten better and more crucial as we’ve gone along. It started out with the ‘SYNTHESIS’ artwork, I told him how I saw the music, as this co-existence of synthetic and organic, the contrast and the blend of two very different elements. He interpreted that visually into mixing media, hand painting on photographs, putting every shot into its own unique universe. The idea for the ‘Imperfection’ video was about bringing that art to life, and capturing the emotion of the lyrics. Our amazing young actress, Rogue Parker, plays the role of me as a girl, my inner-self. The video is meant to give visual to feeling, an internal picture of processing loss, and life, speaking from an adult’s perspective to my past self.”

“This is such a powerful track that resonates on a truly emotional level,” addsdirector P.R. Brown. “The goal we wanted to achieve in the video was to create a visual translation of the music and reveal the meaning in an abstract way. We all struggle in life and need help to get through everything. In this case we wanted to show that sometimes the strength needed to get through has to come from you.”

EVANESCENCE have just launched their U.S. and Canadian “Synthesis Live” tour–which features AMY and the band embedded with a live, 28-piece orchestra and electronic programming delivering a transcendent experience. With only three shows behind them, the critical acclaim is already pouring in for this unique concert event. Tickets for EVANESCENCE’s“Synthesis Live” fall tour (see all dates below) are on-sale now (here).

Both Standard CD & Digital versions of SYNTHESIS are available now for pre-order (here), in addition to a limited-edition deluxe box of the album, which includes the CD, a DVD featuring a documentary on making the album as well as instrumental and 5.1 Surround Sound mixes of the songs.

Catch EVANESCENCE on the “Synthesis Live” tour in the following cities:

Previous Flint Eastwood Ready to Put On A Show in Chicago (Oct. 22nd)
Next Interview with Frank Iero