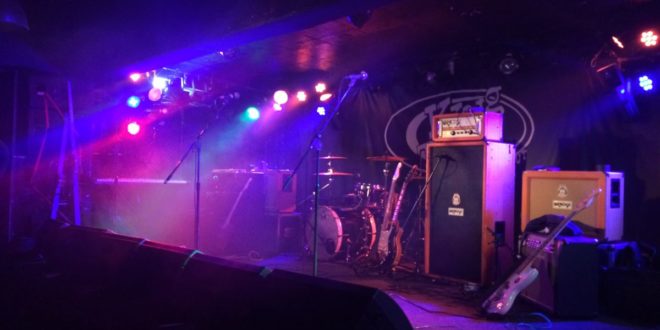 Hello Future opened the show with underlying melodies that brought the night to life. With a year of no shows after releasing their latest record, 2015’s Circular Motion, the indie four piece were the perfect fit and created a uniform in genres throughout the evening, introducing fans to their most recent single, “Eyes on Judgement”.

Joe Junod (vocals) of Dryjacket gave a young Dan Campbell of The Wonder Years vibe, with clear feeling and pretty sounds throughout

songs, even when they were just tuning their guitars. The ups and downs throughout the setlist, mixed with flannel shirts takes you back in time and gives Dryjacket the clear potential to be one of 2017’s pristine live acts, as well as fit in with every soft emo playlist that you could ever imagine.

Dryjacket released their first studio album, For Posterity through Hopeless Records on January 13, after the 2015 Lights, Locks, & Faucets EP,  and teased about another release in the future throughout the night.

And finally, the band everyone was there to see. Despite a delightful introduction to the support acts, The Early November brought the evening to life with a refreshing, hour long performance comprised of deep-routed storytelling and a sense of childhood familiarity for anyone that hadn’t had the opportunity to see The Early November in the UK since 2013’s Slam Dunk Festival.

Between musician and co-producer Ace Enders, and the entire band, the chemistry and stage presence between the five made for an overall contenting live show typical of what you would expect from the band after their many years in the scene.