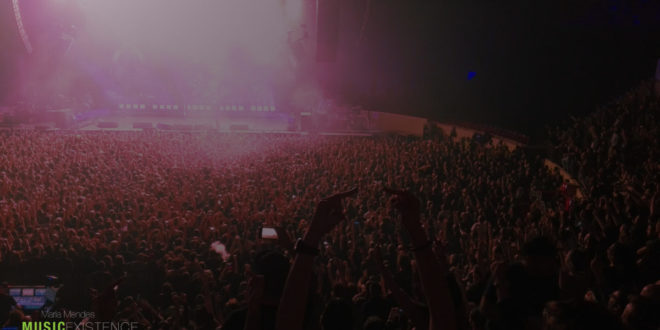 As soon as Lisbon starts to heat up for Spring, Hellyeah, Heaven Shall Burn and Korn came to burn it down.

Currently on tour promoting their latest album Unden!able , Hellyeah performed a short, albeit powerful 30 minute set. Among the 6-track setlist were crowd favorites “Humans” and “Starriot” led by energetic Chad Gray who knows just how to expertly captivate an audience.

Hellyeah wrapped up the set with an emotional performance of the Dimebag Darrell-arranged Phil Collins cover of “I Don’t Care Anymore.”

The legendary drummer Vinnie Paul seemed touched by Lisbon’s warm welcome. He later wrote in Hellyeah’s official Facebook page “Lisbon Portugal you were just as good as I remember!!”

I’m pretty sure Hellyeah gathered a lot of new fans here. And as Gray stated earlier, they already consider us part of a big worldwide family.

Everyone was pretty warmed up by the time the German metal band Heaven Shall Burn hit the stage for an incendiary performance.

Watching from the balcony, I could see that many faithful fans had come out to support the band; singing loudly and swelling the mosh pit that had started earlier during Hellyeah’s set.

But the moment we had all been waiting for was yet to come.

There was an energy bristling in the air in the moments directly before Korn took the stage. The band’s last appearance in Portugal had been at 2016’s Rock in Rio Festival; a performance that had unfortunately been cut short due to unforeseen technical difficulties that disappointed many fans.

Acknowledging that fact the band gave it their all, with an unrelenting performance showcasing new and older hits.

With only two songs from their last album The Serenity Of Suffering, “Rotting in Vain” and “Insane” we could almost say it was a Greatest Hits tour with Korn taking us down a time warp into some of their most beloved songs to date.

One such moment was the anticipated performance of “Shoots and Ladders,” which intro frontman Jonathan Davis initiates on bagpipes, with the added bonus of a snuck in taste of Metallica’s “One.”

We could barely notice there was a formal encore as it took place immediately after the set. “Falling Away from Me” and “Freak on a Leash” was the apotheosis at the end that really lit the audience.

I can say the band made up for Rock in Rio’s mishaps with one hell of a powerful show, showing commitment to the fans and visibly satisfied that this time they had a chance to deliver a performance the fans deserved.