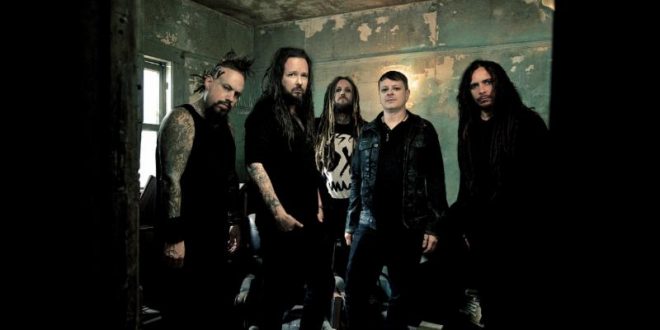 Following great anticipation, KORN–one of the most influential rock bands of modern times–today (July 22) have announced their 12th studio album, THE SERENITY OF SUFFERING. Produced by Nick Raskulinecz (Foo Fighters, Deftones, Mastodon), the album will be released on October 21 and features a special guest appearance from Corey Taylor of Slipknot. It marks the band’s welcomed return to Roadrunner Records who previously released 2010’s KORN III – Remember Who You Are and 2011’s The Path of Totality.

KORN—Jonathan Davis (vocals),  James “Munky” Shaffer (guitar), Brian “Head” Welch (guitar), Reginald “Fieldy” Arvizu (bass) and Ray Luzier (drums)-performed the first single “Rotting In Vain” in front of 25,000 people during a thunderous set at Chicago’s Open Air festival this past Saturday, July 16.  Today, fans everywhere can tune in as the song is officially released alongside its video with the launch of the album’s pre-order here.

“‘Rotting in Vain’ was written about being in that black place, being in situations that I don’t like in life–be it relationships, or feeling when you’re stuck and you’re just being abused or you don’t like where you’re at, and you just sit there and rot,” shares Jonathan Davis.  “It takes you years and years to figure out how to claw your way out. That’s where ‘Rotting in Vain’ came from. I’m just sitting there, fucking dying and letting it happen for years and years and not helping myself to get out of that place. That’s the vibe that inspired the song.”

“Rotting In Vain”‘s macabre video–which makes its premiere today via Rollingstone.com–captures the essence of the song.  Starring “Sons of Anarchy” actor Tommy Flanagan along with KORN, the video taps into the dark underbelly of a bizarre world.View the video-lensed by famed rock video director Dean Karr–now here:

Earlier this week, the multi-platinum Grammy-winning rock band kicked off the “Return of the Dreads Tour,” their co-headlining summer trek with Rob Zombie and special guest In This Moment that crosses the U.S. through September 3.Beginning September 24, KORN will share co-headlining duties with Breaking Benjamin on the “Nocturnal Underground” fall arena tour, featuring special guests Motionless In White and Silver Snakes, that takes the band deep into the heart of America through late October. Additionally, KORN is also set to appear at the Louder Than Life and Aftershock Festival in October. KORN’s full tour routing can be found below.