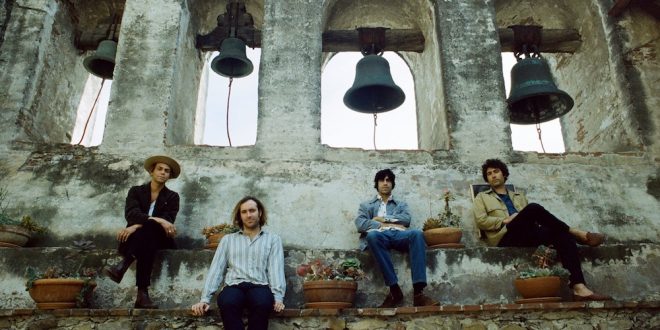 “Could Be You,” the new video from Allah-Las’ forthcoming album, Calico Review, premieres today via Interview Magazine, who says, “Allah-Las is a bona fide Los Angeles rock band…creating down-to-earth tracks that sound as though they emerged from a sultry garage in Southern California.” Of the new track the band notes, “the purpose of ‘Could Be You’ is to look at the concept of letting go and not resisting change just because it compels you to change yourself, which many people find difficult.” The new record is out September 9 on Mexican Summer and is now available for pre-order here.

The album was recorded in Los Angeles’ historic Valentine Recording Studio, which had lain dormant since 1979. For Calico Review, Allah-Las experiment with new instrumentation adding viola, harpsichord, Mellotron and theremin to their sound. The twelve tracks on Calico Review demonstrate how the group has pivoted from focusing on specific influences to crafting songs that reflect their own feelings of freedom, grit and melancholy. The result showcases their evolution as songwriters and arrangers.

Allah-Las is composed of Pedrum Siadatian (vocals/lead guitar), Miles Michaud (vocals/rhythm guitar), Matthew Correia (vocals/drum), and Spencer Dunham (vocals/bass). The band was formed in 2008 while three of the members were working at the legendary Amoeba Music record store. “We were all music fans before we were musicians,” says Correia. “We’ve spent a lot of time listening to music, and understanding what works for us and what doesn’t.” Their 2011 self-titled debut was nominated for independent album of the year by the A2IM Libbys. Of the debut, Pitchfork said, “it sounds like an effortlessly wistful batch of starry-eyed, minor-key beauties that gently ruminate on the usual young-guy subjects: sex, freedom, the ways the former can interfere with the latter and vice versa.”

In 2014, their sophomore LP Worship The Sun received critical acclaim from The Los Angeles Times who said the album “…lets the band’s trippy vintage rock absorb all sorts of new Southern California influences. Latin drumming, L.A.’s midcentury avant-garde beach culture and Laurel Canyon harmonies.” LA Weekly has noted, “their sound is steeped in the pop sensibilities of The Zombies and The Kinks, laced with Northern Soul, lo-fi funk and the ever-enduring influence of Arthur Lee and Love.”

The band has toured extensively with sold out tours and high profile festival dates throughout North, Central, and South America, Europe, South Africa, Russia, Mexico and Israel. For the upcoming North American dates will have the group TOPS supporting in September and October. See below for full tour dates.

Tags Allah-Las Calico Review Could Be You Music Video tour