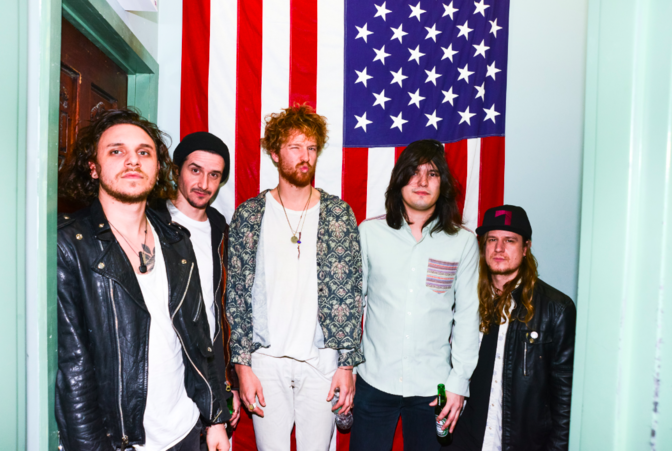 Indie rock band Walking Shapes debuted a new video for their single “In The Wake” on  March 4th, 2015. The video was made by the talented French director Laurent Briet (Albert Hammond, Jr, Danny Brown).

ABOUT THE VIDEO:
Speaking about the video, frontman Nathaniel Hoho says “I feel that Laurent did an excellent job of depicting the lyrics for this song especially playing off the line “new pollution”. Mankind, with our tools and disposable thumbs continue to evolve into incredible beings that are capable of achieving and inventing miraculous things. This is a double edged sword. Many of our advancements are seriously affecting the natural order of our planet. Throw in to the mix religion, money, and conven-ience and we are now making some decisions as a species that are, to say the least, very incon-siderate to all of us. I hope that this video can be a reminder and awakening in some, that we weren’t the beginning and we won’t be the end, but as conscience beings, let’s unify, get a grip, and start nurturing and respecting our planet. We humans need to keep that in check.”

ABOUT WALKING SHAPES
“You know how if you put two cells together, a whole new energy is formed?” asks singer Nathaniel Hoho of Walking Shapes. Hoho speaks to the natural evolution of the 13 sonically-clear and glistening songs that landed on Taka Come On, the band’s No Shame debut album.

Formed in the wake of the pair’s songwriting collaboration, Walking Shapes is the living and breathing result of a unique creative environment, centered in a house on Kingsland Avenue in Brooklyn owned by visual artist Joseph Grazi, which frequents creative types such as actors, artists, musicians. “People show up and hang out until five in the morning and that energy has swirled into our scene and core group of friends,” says violinist Jesse Kotansky. The band is comprised of Nathaniel Hoho (vocals, guitar), Jesse Kotansky (guitar, violin, vocals), Jake Generalli (keys, vocals), Dan Krysa (bass, vocals) and Christopher Heinz (drums).

The tradition of artists and musicians living side by side under one roof sounds like a dream of New York past, the times when folksingers congregated in Greenwich Village, rockers crashed at the Chelsea Hotel, punk and new wave flourished on the Lower East Side’s clubs and lofts and hip hop was birthed on the streets and parks of the boroughs. Walking Shapes carry forward that kind of collective energy, injecting the spirit of the city’s noises and the souls of its people into their songs, with the resulting frenetic charge and emotional waves feeding back the sound of the proverbial city that never sleeps.

The band gelled organically: Initially formed through Hoho and Kotansky’s late night writing sessions. Hoho rode the same train as drummer Heinz, who brought in bassist Krysa for a readymade rhythm section; Generalli and Kotansky had been friends since childhood. Signing to No Shame, its SOHO studio facilities made the hours of endless experimenting more accessible and soon they’d laid down something like 50-60 songs. When producer Gus Oberg (The Strokes, Ryan Adams, Willie Nelson) entered the picture, “Gus was able to help us define our sound, whittling the tracks down slowly, then often took the first take,” explains Hoho. Kotansky adds, “It’s what allows us to create beauty out of chaos and send it back out into the world.”

On October 2014 Walking Shapes again entered the studio with Oberg to begin their follow up LP, which is expected to be released later this year. First the band is wrapping two club nights in London; one for VICE Magazine and another for Mumford and Son’s Communion Music, Paris Fashion week, Isle of Light Festival in the Dominican Republic and SXSW.