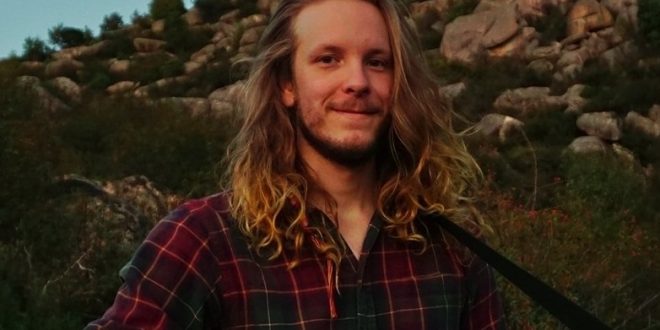 To confront the legacy of racism in America, we need more than pretty words. We need voices in dialogue — truth-telling voices from brave people willing to ask and answer hard questions. Shane Palko and Mannie T’Chawi are artists like that: they’ve never been afraid to call out injustice or grapple with the demons that haunt our common history. But more importantly, they never hesitate to speak to each other. The dexterous guitarist and folk-rock singer and the fearless spoken-word poet and pianist have joined forces for “Blood” and “Fathers,” two strange, stinging, mesmerizing, thoroughly gorgeous recordings that are terrific on their own but which achieve powerful resonances when heard back-to-back.

“Blood” is a heartfelt confession and a showcase for Palko’s instrumental talent. It captures the Pennsylvania songwriter in the raw, weaving hypnotic patterns on his acoustic guitar and matching his riffs with a candid, plainspoken vocal that radiates sensitivity — and culpability. Palko’s unapologetic lyric interrogates the complicity of silence common among white Americans and asks all of those who have benefited from the social system to acknowledge the blood on their hands. It’s a fearless statement from a vital artist who has always written with profound urgency and searing emotion.

T’Chawi’s poised, incisive performance on “Fathers” feels like a rejoinder. It’s a message from a common man — an ordinary African-American caught up in a brutal fight he never asked for. Without a trace of acrimony or resentment, he lays the problem bare for the listener and summarizes generational trauma in muscular, economic verse. The track distills many of the themes of his two excellent, acclaimed Ruminations of a Ruined Mind poetry collections. T’Chawi first found fame in Tanzania as a kid through music, and later as an adult, through his fintech entrepreneurship – both of which have shaped his poetic voice and journey. Palko and T’Chawi are Delmarpa dwellers at the moment, but have been and will continue to be global citizens and artists.

“Blood” and “Fathers” are both paired with videos destined to cross generational – and geographic – borders. In fact, the historic footage seen in the clips was shot by Palko’s grandfather on 8mm in the 1960s. T’Chawi is the focus of the unsparing “Fathers” video, and he’s a commanding screen presence: passionate, plainspoken, exhausted by struggle, animated by the righteousness characteristic of truth-tellers. He delivers his verses from a highway overpass and finds accompanying musical phrases on a burning piano in the middle of a field. The “Blood” video is similarly pastoral and crackles with a similar kind of danger. Palko strums and howls from a stark farmhouse. His pained face is illuminated by the light from a gun case that contains an impassive African mask. Instead of a strap, his guitar is suspended around his neck by a rope. It’s all a gripping reminder of a terrible national crime — one we haven’t finished paying for.