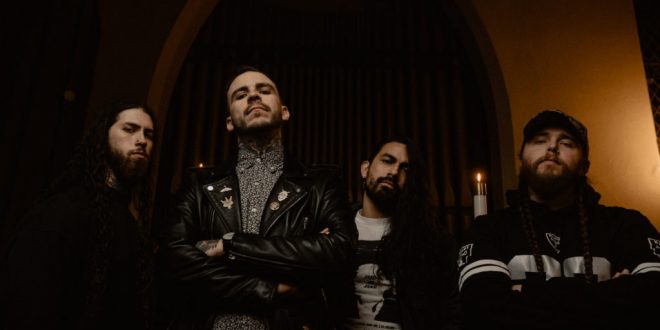 Great American Ghost presents a guitar playthrough for “Death Forgives No One.” The track comes by way of the band’s Torture World EP, released earlier this year via MNRK Heavy.

Produced by Will Putney, who handled the band’s critically-adored 2019 Power Through Terror full-length, with Torture World, the band directs old-school death metal wrath at hypocrisy, apathy, and self-loathing, delivered in a dark cloud of relentlessly bludgeoning riffs.

Great American Ghost is currently in the midst of a European tour supporting Fit For An Autopsy with additional support provided by Ingested, Sentinels, and labelmates Enterprise Earth. In July, the band will support Enterprise Earth on their US headlining run. The Chosen Tour begins July 22nd in Seattle, Washington and runs through August 20th in Salt Lake City, Utah with additional support provided by Within Destruction and Sentinels.

Previous Gallery: Giant Rooks at Teragram Ballroom in Los Angeles, CA (05.21.22)
Next GLASS HANDS MOVE FORWARD IN THE CATCHIEST WAY POSSIBLE ON “HOW DO YOU FEEL?”