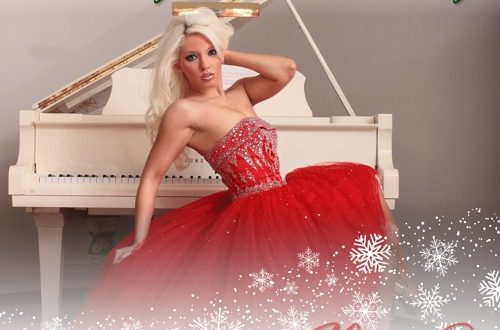 Alicia G has a lot going for her in the new single “You’re My Favorite Holiday,” but above all else is her one of a kind, extra-delicate lead vocal. Light enough to balance out the piano element in the track without needing much boost from the bass, and yet strong enough to carry the weight of seasonal lyrics – the best of which often tend to have a short shelf life – her voice is a dual-threat if I’ve ever heard one before. She absolutely nails the holiday season sound so many of us crave every year here, and arguably presents a melody good enough to last a whole year long.

The vocal tone matches the theme of the verses perfectly, and I would even say that were Alicia G to modulate her melodic disposition at all in the chorus, it wouldn’t have sounded as Christmas-like as it does in this setting. Presentation is essential to making any pop songwriting work, but in this subgenre, I would say such a statement is all the truer. She knows how to be vulnerable and virtuosic when necessary, which is not a combination that I hear a lot of in any style of music anymore, let alone pop.

This mix develops quite the intimate feel for the performance, almost as though we’re listening to something that was recorded in a small club instead of inside a traditional studio. Alicia G’s presence is neither overstated nor flamboyant, but instead a simple accompaniment to the arrangement that is as irreplaceable as the harmonies she forms with the piano keys. She’s got the personality for this kind of a piece, and the clarity we get out of the production quality makes it easier for critics and fans the same to appreciate her gifts at their most refined.

“You’re My Favorite Holiday” offers a rather romantic piano complement to our singer’s careful crooning that I fell in love with on the spot, and I can only imagine that they would sound even better together in front of a live audience. There’s so much charisma overflowing from the speakers in this single, and while it’s hard to imagine Alicia G capitalizing on it any more than she already does in this performance, to see her bring even a fraction of this energy to the stage would be really incredible as a music lover and as a journalist.

I can’t wait to hear what Alicia G is going to produce in the future, and judging from the strength of this holiday-style pop piece, she isn’t going to have a hard time creating an identity all her own in any composition she puts forth. Christmas music is, as a general rule, thought to be some of the most difficult content to record with any sense of originality guiding the verses from artist to audience, but it’s difficult to fathom as much when listening to a performer of this caliber do what she was so clearly born to do. Alicia G’s talents take over quickly here, and I think they’d likely do as much in any work she records.