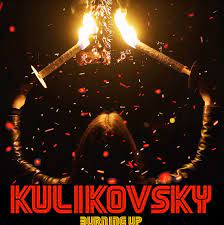 There are no limits in modern electronic pop, and in the R&B-stylized “Burning Up,” Kulikovsky proves as much inside of three and a half minutes of sonic bliss. Rather than coming on strong with a heavy synth assault, Kulikovsky lets the tension build in “Burning Up” behind a bassline that could knock you right off your chair at the right volume. Slowly but surely, we find ourselves encased in a cerebral synthesizer harmony both larger than life and yet contained by a vocal as light as it is velvety, and when the track is over, it feels like we’ve spent a night under the neon lights featured in the music video.

This lead vocal isn’t an afterthought beside all of the incredible instrumental wonderment coming together in “Burning Up,” but instead one of the more surprisingly organic elements to behold in the song. Kulikovsky winds up a melody similar to something you’d hear in a straight R&B slow jam only to let everything come undone in a chorus that is more club-driven than anything else. We want to dance in synchronicity with the rhythm, and yet it feels centered more on the harmonies than it ever does the percussion.

I definitely pick up a new jack swing influence in the structure of this song, specifically with regards to how the vocal is interwoven with the backend of the mix. It’s not an outright copy of MJ’s blueprint, but Kulikovsky is admittedly flirting with a retro-level brooding in his lyrics that meshes with the upbeat tempo of the song perfectly. He’s both introspective and contemplative without sounding overly insular, which is something that a lot of his peers have struggled with – especially within the context of making a surreal, slow-rolling club anthem like this one.

Kulikovsky has a lot of talent that he’s bringing with him into the studio right now, and I’m eager to hear more of what “Burning Up” is all about. Instrumentally speaking, this is a performance made to heighten the senses like an adrenaline-pumping drug, but it doesn’t ever sound overwhelming the way a lot of danceable, electronic material tends to these days. I’m a fan of where Kulikovsky’s head is at compositionally in “Burning Up,” and I think it’s only the tip of the iceberg in terms of what he could potentially produce in the right scenario, given the right tools and a receptive American audience hungry for mad beats.