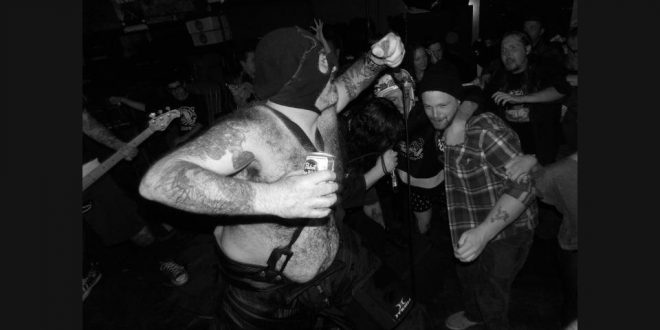 42
SHARES
FacebookTwitter
Legendary Long Island punk band Two Man Advantage is releasing a live vinyl album featuring two live performances, separated by 16 years!  Side A captures a show live at the legendary punk venue CBGB in August of 2002., while Side B is live at the Punk Rock Bowling Festival in Las Vegas in May of 2018.

Released on Florida punk label DXPC Live, the album is pressed on 3-Stripe in Red, Black and White and features a special fold over cover, allowing people to choose the black and white cover that looks like an old V.M.Live cover, or reverse it and show the live photo cover.

For DXPC Live, the decision to release the live album was an easy one. “I had heard of 2MAN, but I had never seen them, so when this punk kid named Jizm asked me to book a show for 2MAN in Baltimore I didn’t quite know what to expect.  2MAN showed up, and I was honored that they did since they had been offered a chance to play the Hardcore Super Bowl in DC that same night with The Circle Jerks, Suicidal Tendencies, and many, many, many more. They turned down the offer because they felt they owed it to me. What followed was a beer-fueled, cheesecake-covered, sweaty mess of some of the best punk rock I’ve ever seen!”

To promote the release, Two Man Advantage has released a live video of  “Zamboni Driving Maniac”, a single about a drunken Zamboni driver that landed the band in hot water upon its release. “The Zamboni company genuinely hates the song. When the studio version came out Zamboni looked into suing 2MAN.” says the band. Indeed, a Los Angeles Times article quoted a spokeswoman for the company as saying:

” “We’re taking a look at that with our trademark attorney”. Part of the company’s concern, Jensen said, is whether the song “implies an unsafe activity.” Part of what is upsetting the Zamboni Co. is the fact that the song has been played in hockey arenas all over North America.”

The video was made by No Vacancy Media by compiling a montage of video footage found online. You can watch the video below:

Together for more than 20 years, Two Man Advantage is the world’s premier hockey punk band. Known widely for their explosive live performances, the band has been featured in some of the country’s most high-profile media outlets: The New York Times, The Wall Street Journal, The Los Angeles Times, ESPN, and their music has been played in numerous NHL arenas.  Through it all, they remain true to their underground roots and continue to play dive bars, DIY spots, and punk houses across the country in support of their numerous full-length LPs and other releases. The album is available for pre-order now at DXPCLIVE.com.

1. Bastard Of The Ice