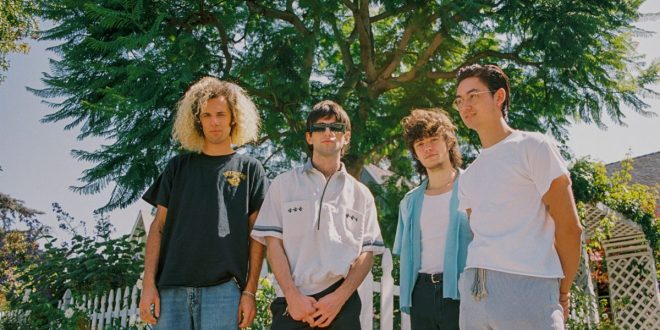 Today, Los Angeles rock outfit Liily have returned with a shoegaze slow burner entitled “Anvil,” yet another single off their upcoming long-awaited debut, TV or Not TV. Flaunt hosted the premiere of the track and its accompanying music video (which was directed by guitarist Sam De La Torre).

On the single, Liily said: “‘Anvil’ is our attempt at a shoegaze song and ultimately my attempt at variation lyrically. I really tried to poke fun at the intensity at which a song like this could have, exemplifying that through hyperbolic statements like ‘I made my death bed’ or ‘it might be the last thing I ever wear’—just to be as outrageous as possible in the fewest words possible. This was fun for us because we grew up playing around a lot of shoegaze bands but never was one, so it was exciting/challenging to write a song in a genre that we could never imagine playing but love so much.”

Liily are four Los Angeles musicians — Dylan Nash, Sam De La Torre, Charlie Anastasis & Maxx Morando — who, up until now, were mostly known for their manic and cacophonous live shows. Those performances, alongside a couple of early singles packaged together into an EP entitled I Can Fool Anybody In This Town, drove the band to some surprising early successes: performing at Lollapalooza and Bonnaroo, touring across Europe and the United States, then finding themselves on the cover of Spotify and Apple Music’s major rock playlists.