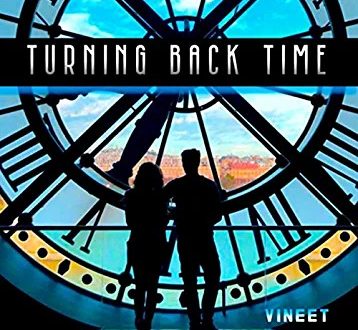 “Sometimes, the present can be so unkind and the future is uncertain for all. So where does one go to feel that magical feeling of togetherness, even romantic highs?” Pop-rock visionary Vineet had this to say about his latest single “Turning Back Time,” an undisputed send-up to pop tracks that more or less made pop music what it was, way back in the long-ago era of the early 2000s. The music paints a retro picture for listeners that takes them back to production they would find bumping in clubs and across radio stations, summoning the energy and eclectic electronic instrumental prowess exhibited by only the most iconic pop idols of yesteryear. The song pays great attention to the detail needed to bring about similar emotions elicited by favorite iconic pop singles while forging its path forward — “Turning Back Time” is an excellent new entry for Vineet’s ever-expanding discography.

Vineet is no stranger to flexing a decent amount of variety throughout his past as a musician. Tackling nearly every genre from rap tracks and rock anthems to the bass-thumping extravaganza of pop, there’s nothing in music too far out of his reach; “Turning Back Time” focuses on the latter as it doubles down on the sounds initially explored in Vineet’s previous single “Dreamin’ Out Loud” with a more pop-forward sensibility. While its predecessor felt like a song with rock composition turned into a pop single through instrumental changes, “Turning Back Time” is a song undeniably pop-based in its composition.

The DNA of the song is undeniable when it comes to reminiscing on older pop hits, and Vineet has even said as much. He smartly designed the music with a structure that would “make you slightly ‘rewind’ to the wonderful years of sweet synth-based pop melodies.” There’s brilliant attention to detail with the single that gives it the flair of a song from decades ago with the tight production and modern scope of a song released in 2021.

The music video for “Turning Back Time” superimposes footage of picturesque memories, cross-faded over clockwork imagery and lends itself deeper into the time travel mythos at the forefront of Vineet’s high-concept songwriting style; he says “The music video of the song uses ‘reversing time’ literally but it attempts to create a vibrant upbeat mood of people immersing themselves in their memories. Various symbols of time and space, rewind, to aesthetically enhance the appeal of the video.” The video brings an even greater understanding to the single by offering lyrics and imagery to give the audience something to attach themselves to. All in all, “Turning Back Time” is a significant feather to add to Vineet’s musical cap.

There’s a great deal to admire within his understanding and grasp of modern and classic pop music, and he showcases all of his strengths and love for the genre here brilliantly. “We can turn back time to tap into our sparkling memories for some uplifting moments. Our memories are an abundant source of so much love we have felt and can be a wonderful ‘map of desire’ that we need back in our lives, for the future,” says Vineet. There’s no looking forward without first looking back, and “Turning Back Time” will happily have you doing both.