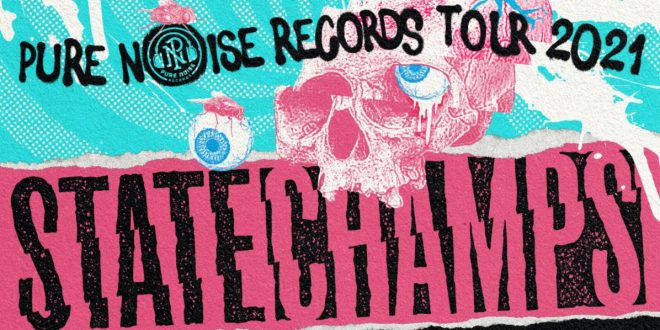 New York pop-rockers State Champs have announced they will be headlining the 2021 Pure Noise Tour with support from label-mates Four Year Strong, Real Friends, Just Friends and Bearings. The 24-city tour kicks off on September 14th at Brooklyn Bowl in Nashville, TN making stops across the U.S. in Detroit, San Antonio, Los Angeles, Philadelphia, Boston and more before wrapping up in New York, NY at Irving Plaza on October 22nd.

“We are heading back on the road to headline the Pure Noise Records Tour this September-October. It’s been too long since we’ve been able to do what we love and see everyone in the US,” shares Vocalist Derek DiScanio. “Expect this one to be extremely special as we will be with plenty of good company including Four Year Strong, Real Friends, Just Friends, and Bearings. Get your tickets quick!”

All tickets for the upcoming Pure Noise Tour go on sale this Friday, June 24 at 10am Local Time. 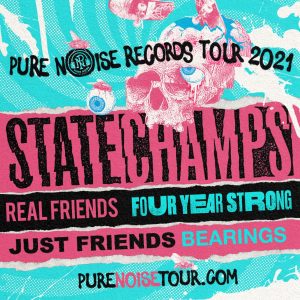 State Champs released their latest EP State Champs Unplugged in the summer of 2020 via Pure Noise Records. Featuring four new songs as well as two fan-favorite tracks from Living Proof, the EP is reflective of the diverse listening habits of the foursome, unapologetic about their love of everything from Pop to Country without sacrificing the upbeat enthusiasm of the central influences that first moved their collective souls. State Champs Unplugged is available to stream at https://smarturl.it/StateChampsNY.

State Champs has always embraced the idea of getting their music in front of as many people as possible. They aren’t running away from the sound they’ve established; if anything, it’s that scrappy punk spirit that drives them to continue to reach further and further. They’ve done pop arena tours, metal tours; they’ve even played a show on a beach. Wherever they turn up, they are going to be sincere and passionate. They are going to have fun. And moreover, so will you. This is an arena-ready band, capable of moving any kind of crowd, with the heart and soul of DIY freedom.

For as much as the world has changed since Real Friends first emerged in 2010, the band’s mission hasn’t. The Illinois quintet continue to bleed without apology and write songs that make it okay to feel everything: the ups, the downs, and anything else in between. Rather than shy away from emotion, the group run right towards it with distortion cranked and hearts opened, tightening their careful distillation of pop and punk on each subsequent release. When the band—Dave Knox [lead guitar], Kyle Fasel [bass], Eric Haines [rhythm guitar], and Brian Blake [drums]—welcomed vocalist Cody Muraro in 2020, the goal stayed the same as they crafted new music for Pure Noise Records.

Over the years, Real Friends have forged and strengthened a deep connection with fans. The group’s 2014 full-length debut, Maybe This Place Is the Same and We’re Just Changing, marked a turning point. Rock Sound named it one of the “Top 50 Albums of the Year.” 2016’s The Home Inside My Head maintained this momentum with further acclaim and sold out shows. In 2018, Composure incited applause from Music Connection, Alternative Press, Substream Magazine, New Noise, and Billboard who described it as “raw.” To date, they’ve also amassed over 100 million streams and counting. In 2021, they turned the page on a new chapter with the singles “Nervous Wreck” and “Storyteller.”

At the core of Just Friends, a funk-punk collective from California’s Bay Area, is the idea of community. To understand this, you need only to pull up any video of them playing live — like this rendition of “Never Gonna Bring You Down,” from their latest album, 2018’s Nothing But Love. Over bright horns and guitars, lead vocalists Sam Kless and Brianda Goyos León trade lines — sometimes singing, sometimes shouting — adding to each other’s energy with every syllable while their band-mates groove along. The result? A bombastic musical celebration that incorporates elements of punk, hip-hop, funk, brass, and emo; an epic group hang-turned-dance party.

There’s a sharpened take on the classic pop-punk vibe the Ontario, Canada-based quintet – Cousins, guitarists Ryan Culligan and Ryan Fitz, bassist Collin Hanes, and drummer Mike McKerracher – have traded in since forming in 2014, the same mix of ebullient energy and undeniable melodies that have earned them respect and tour invitations from both new-school heavyweights like State Champs and legends like Less Than Jake. While the world outside is certainly anything but sensical these days, Cousins and his bandmates have worked to mine their mixed emotions on their sophomore full-length. ‘Hello, It’s You’ is now at: https://smarturl.it/Bearings

Caitlin Dunn is a Massachusetts based photographer who loves photographing concerts as well as events and lots of other things!
@@caitlindphoto
Previous Introducing 17 Year Old Artist/Producer From Greece Giannis Loud
Next Beartooth Release New Album “Below”