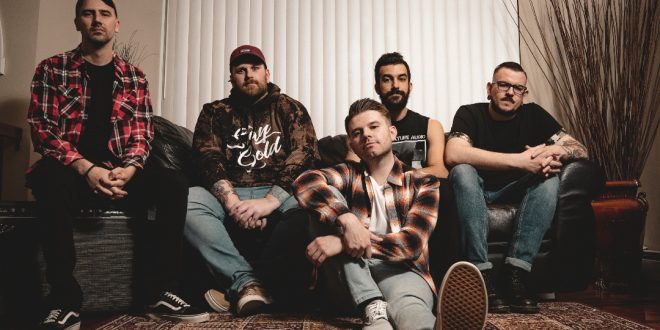 Boston/Long Island pop punk outfit Quiet Like A Thief have just released their latest album, Through The Looking Glass. Big hooks, heart-on-sleeve lyricism, cascading and beautifully presented melodic rock production adorns the EP, sure to make them a household name in the pop punk scene.

On release day, the band has released the track “Downward Spiral” as a single. The song features Nick Thompson of Hit The Lights and was produced by Alan Day of Four Year Strong.  Lyrically, the track focuses on anxiety, depression and getting lost inside of your own head. “We take mental health very seriously, and is something you must take proper care of,” says the band, “Sometimes medications prescribed from doctors are just a temporary “fix” and requires much more, such as taking the time to truly understand and evaluate yourself. We are advocates for mental health days.”

The band dropped the lead single “Travel In Time” a few weeks before the album’s release. The track is a bittersweet pop punk jam about the desire for happiness. “The band was born in tragedy, and throughout 2020, loved ones were lost, difficult and strange happenings were faced, and we just couldn’t help but feel lost,” explains the band, “The song is about wishing we could travel in time, whether it be to the past or future, to happier and/or much simpler times. However, through a life that felt like it was crumbling through our fingers, time eventually heals and it is important to remember that there is a light at the end of the tunnel, no matter how dark.”

The song evolved from it’s original form with the help of Producer Alan Day (Four Year Strong). “Originally, the song was a much more dark and heavy rock song.” says the band, “After working with our producer Alan Day, it became this Pop Punk banger that is sure to be a Summer 2021 jam.”

Quiet Like A Thief was born from the brains of Alex Kouvaris and Ryan Sweeney, whose friendship and musical chemistry is the beating heart of the band. With myriad tours and notable support slots from their times together in previous bands, Quiet Like A Thief is the melting pot in which the two have honed both their experience and musical insight.

Previous Your Heart Will Be Entangled By Shihori’s Latest Music Video “Invisible”
Next Single Review: Dave Vargo “Half Bad”