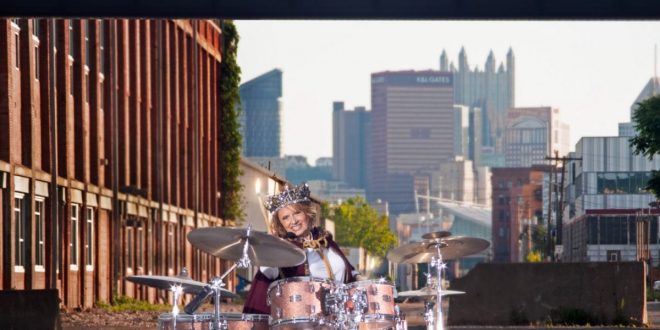 Tedi Brunetti has been an unrelenting force in the music industry for many years, pushing limits with each subsequent project she gets involved with. On “The Queen of Pittsburgh”, Brunetti’s sophomore solo release, she crowns herself with a title that fans and critics believe she aptly deserves.

Having fallen in love with music at a very young age, Tedi decided to pursue her passion. For a long while, she was the touring drummer for names like Eloise Laws, Isis’ Carol MacDonald and Witch, and The B-Girls, produced by Debbie Harry and Mick Jones. Tired of hiding her voice and talents behind other singers, Tedi formed the Tedi Brunetti Band, an outfit that has become a force to reckon with, in and out of Pittsburgh.

“The Queen of Pittsburgh” is only her second album and is expected to be released later this summer, on July the 20th, with a teaser single “Evil Woman”, warming up to this much-anticipated release. If Tedi’s track record is anything to go by, her fans are in for a huge treat in this forthcoming album.

For Tedi, “The Queen of Pittsburgh” is not business as usual. The album is a journey back to the music that she grew up listening to. “The album began as a legacy album of sorts” is how she describes the original idea of the album. Now, she can look back with nostalgia to all the fun times she had while producing the album, on which her husband and two kids all perform.

The album explores a myriad of genres, from bluesy tunes to hints of jazz, to all the styles of pop classics of the 20th century. “The Queen of Pittsburgh” packs the old, the familiar, and the new in a thrilling album, that is expected to delight fans of Pittsburgh’s reigning Queen.