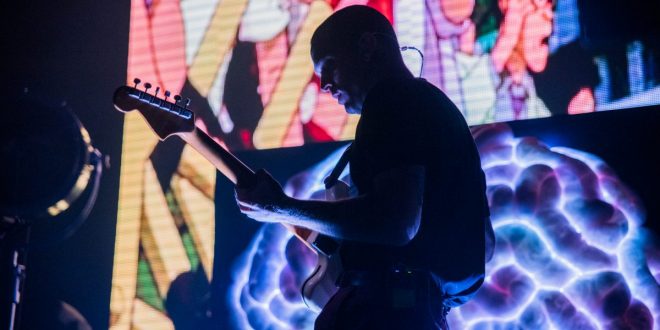 For the first time in 3 years, LA’s Sir Sly is releasing music and anticipating a new record. We sat down with frontman Landon Jacobs to discuss some of their latest releases and the current social climate. Check out what he had to say below!

You talked a bit about the thought process behind your cover in the description of the video- but was ‘Karma Police’ a song you had already set sights on to cover before the current social/political unrest?

Somebody had brought up doing a cover of a comfort song or something that felt familiar because when COVID happened, and everyone was stuck at home, people started listening more to their comfort songs. I understand it because I’m not a big music discovery person, I just have a few staple records that I listen to over and over again. The idea of covering a Radiohead song was something I always wanted to do with a certain level of respect because they’re one of my favorite bands of all time, and ‘OK Computer’ is one of my favorite records of all time. The world ‘police’ is kind of a buzzword right now and I think we kind of stamped on that after the fact that it was probably subconsciously there from the get go. It wasn’t entirely planned but I think it was a natural fit after the song was done to make it about doing something positive and speaking out for the type of change we and so many others are looking for. ‘Karma Police’ is actually something we covered a long time ago that never came out, so we just did a re-tooling of it. I did a lot of the recording at my place since we’re not going into the  studio, then Jason re-worked a bit of it, Hayden sent in some stuff, and Jason mixed it all together.

You posted about how some comments on the cover are taking the ‘shut up about politics and just make music’ side, but you don’t make music or statements to appease those people. Can you elaborate on that?

I remember seeing something about how social media gives people a certain type of direct access to hurting, other people’s stories, and general things that are happening. I feel like it’s this access that can make people uncomfortable, and it ends up in situations like the NBA’s “Shut up and dribble”, when Colin Kaepernik took a knee, or when Tom Morello was taking a stand and people were bashing them. Lately people have kind of realized that you don’t have to be a poly-sci major from Harvard to speak out about and have a stance on things, but it just so happens that he (Morello) is. I think that music/art are inherently linked, but don’t necessarily have to be, to situations like these. Creative people tend to think about what they make and how they live differently, so they’re more aware and more vocal politically and socially. For me, I feel like it’s a natural step to go through to stand up as a person when it comes to things like these but also take a step back and listen to the people it directly affects.

You specifically mentioned Nikole Hannah-Jones when speaking of BLM recently, do you have any specific pieces of hers that have jumped out to you that you want to recommend to your listeners?

Hayden was the one that actually wrote the description and he directed me to ‘This American Life’ which is a podcast about desegregation and enacting peace. It’s 3 or 4 episodes long and I was close to tears throughout because it’s extremely emotional. She is also involved with the 1619 project which also is directly related to the education system and paving the right path for youth of color.

‘All Your Love’ was your first new release since your sophomore record ‘Don’t You Worry, Honey’. Why did you choose to release a new piece of music as opposed to one fans may have already heard, like ‘Pressure’?

Most of the reason is because ‘Pressure’ just wasn’t even finished yet. We were playing a version live before we ever even had a recorded version, so most of it was just because it was unfinished business. ‘All Your Love’ felt a little more specific and of the time to be released anyway- It’s a little pensive and has a little more thematically that relates to isolation and what everyone is going through during COVID. It just felt like the right song, right moment. Also even though we have an album almost entirely finished, ‘All Your Love’ was never intended to be on the album, and we wanted to release music without pointing directly to the record.

A lot of your standalone releases such as ‘Expectations’, ‘All Your Love’, and your cover of ‘Karma Police’ seem to explore more ambient or electronic influenced sounds compared to your albums. Do these exist as singles because of that?

I think there’s just natural distinctions between album songs and non-album songs. Usually for albums we may have a few songs that all sound different, but they all lead to a similar place. Single releases may more point to where we’re at in the moment and that’s why they tend to fall in place that way. That’s where the question of if a song belongs on an album comes in, and I think that songs that take up a little more space or adversely have a lot less going on have their own space to live outside of an album. I tend to consume records as full bodies of work instead of picking out singles, and that’s how I like to write records to sound.

Do you believe that the full-length album format is more or less effective now that music consumption has shifted a bit due to quarantine?

That (album format) is something that’s just been less effective in general over the years. I can only speak from my own experience, but I make albums because that’s what I love and I’m not too concerned if that’s good for the band or not good for the band.