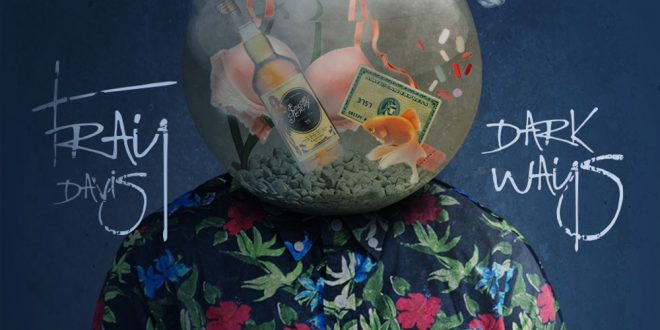 Since 2010, Tray Davis has been crafting and refining his own blend of pop-oriented hip hop. The Florida-born, California-based singer/songwriter and rapper would make his recording debut in 2017, with his acclaimed EP Urgent Care spawning three popular singles: “Bicoastal,” the Forgiato Blow-guested “Boatloads,” and “Divine Intuition.” Following its success, Davis extended his momentum with several one-off singles over the next few years.

Earlier this month, Davis returned with the full-length album, Dark Ways, which continues to gain traction up to this point. Before any of the album’s material is considered, the cover art is very well done in terms of depicting the components of his sound. The first two tracks, “ Devil on Vacation” and “Lee Sun,” kick off the album seem to fit within this dynamic, featuring summery, island-esque instrumental hooks that are offset with thematic nuances of excess and uncertainty. Throughout each of the songs, I can appreciate the crispness in Davis’s tonality as he is singing and rapping. While not the most melodic singer or technical rapper, there’s a sort of punk, tongue-in-cheek aesthetic in play for how he approaches that sensibility. Up next, “ZAF” and “Gin for My Sins” seem to follow a similar thematic pattern, with the latter serving as the extreme scenario for when such excess reaches a peak. Although the instrumental progression between tracks takes on a slightly more pronounced tone, Davis’ humorous means of depicting these experiences continue to provide the album with a nuanced, lighthearted distinctiveness.. Capping the album’s first side is what I’d consider one of its highlights, “Hazards.” The arrangement and thematic a seems streamlined, but in a way that and promptly draws listeners’ attention to his musical identity thus far.

On the latter half of the album, there seems to be a shift toward a more pronounced somber aesthetic, both structurally and thematically. The haunting key sequence “ In Bad Health” makes the ideal accompaniment for the song, as it centers on the immense anxiety one feels when putting someone’s life before their own. That angle is further expressed in the next three tracks, “Less Than Bestfriends,” “Ratchet Models,” and “Scumbags,” each instance showcasing increasingly primal perspectives of fickle mentality. By the final track, “Daphne,” Davis’s tonality is surprisingly heartfelt, melodic, and in a sense, showcases newfound growth in his character. From his initially impulsive, yet indifferent view of the excesses in his life, related to women, drugs, and alcohol, above all, he seems to recognize the extent of his actions, even wishing the best for one of the women he has knowingly wronged. At the same time, the instrumentation on this track is more neutral, with a cool, thoughtful ambient vibe, signifying a gesture of forgiveness.

Overall, Dark Ways took me by surprise, in the genuine sense of the term. Going into the album’s first track alone, I honestly thought it was just going to be another aimless cloud rap release that would usually sit among a saturated scene, but as the album progressed, I stood corrected. Throughout, Tray Davis exhibits a subtle, distinctive type of charm, accessibility, and ultimately, where it counts, growth. There’s clear potential that has sustained between this release and his debut EP, and I’m looking forward to how he further develops as an artist down the line.

I come from a family who is passionate about all things music. I learned to sing at an early age, and by 13, had my very own Fender Strat guitar. I tried my hardest at learning all that I could. Because I was born with cerebral palsy, I had to teach myself an adaptive playing style. I learned to write and record my own music, despite these difficulties. In college, I started making great use of my writing abilities by reviewing music, as well as copy editing. I guess it's best to stick with what you know, while welcoming a fair challenge at the same time.
Previous Interview: Sir Sly’s Landon Jacobs chats new music and social justice, hear their new single “Material Boy” now
Next RIG TIME! Releases Bold, Gritty Cover of DRY KILL LOGIC’S “Pain”