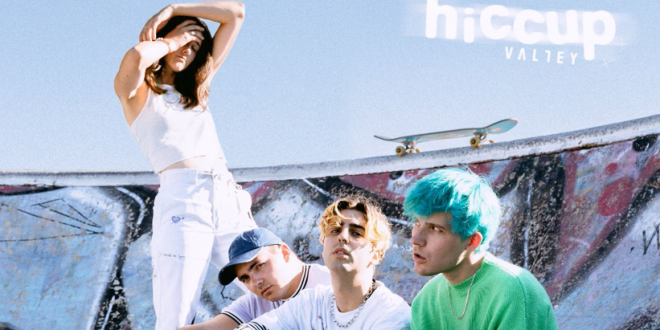 Indie-pop Canadians Valley have released their new single “hiccup” via Universal Music Canada. The band released a video for the track today, which features Valley at their local skate park, getting DIY tattoos and shaving their head in response to a break-up (you know, typical things you do after getting dumped). The band stated, “We’ve always identified the “hiccup” video concept as being a sentimental sequel to the song. It feels like the last phase of a breakup where you finally reclaim your sense of self again; doing things for you again, surrounded by good people and a genuine sense of closure on your past.”

Valley peaked over the past two years, garnering over 45 million streams on Spotify alone and securing coveted support spots for artists like Lennon Stella and The Band Camino. Last year they released their full length debut album Maybe and finished the year off by receiving a 2020 JUNO Award nomination.

Katie is a Toronto based writer for Music Existence. She loves all things rock n' roll & Star Wars.
@katietymo
Previous Exclusive Interview With David Sprague Of Psychopath Etiquette
Next The Beaches Drop Surprise Video for “Lame”