Home / News / Steel Panther Give Back For #GivingTuesdayNow 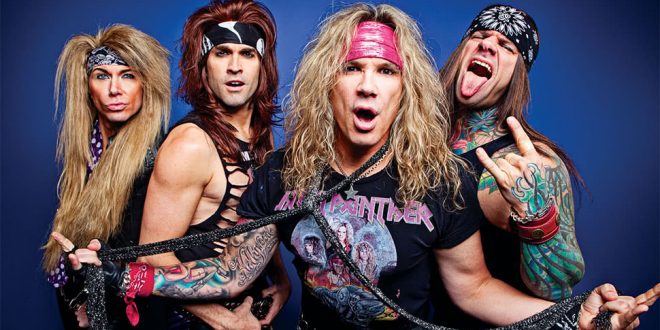 California rock legends Steel Panther have always been associated with things that are hard. Hard Rocking. Hard Partying. Hard Cocktails. As part of #GivingTuesdayNow; modern day philanthropists Michael Starr, Satchel, Lexxi Foxx, and Stix Zadinia are showing their softer side. The band has partnered with Los Angeles based animal rescue Heavenly Pets to setup the Steel Panther All Day Kitty Cam. The cam will broadcast kittens from the shelter that are available for adoption as well as accept donations to help the rescue with costs attained from the increase in abandoned pets due to the Covid-19 pandemic. This isn’t the first time the band has supported animal rescues. On their tour last year, the band invited local animal rescues in each market to come out and collect donations at their shows as part of their Gods Of Pussy Animal Rescue Activation. The kitty cam is an extension of that idea as all immediate touring plans have been placed on hold due to the Covid-19 outbreak. The stream of the camera will be hosted on the band’s website and can be seen here:  https://tinyurl.com/SPKittyCam.
“We heard GivingTuesdayNow was May 5th and our early plan was to give away free Mexican beer for Cinco De Mayo, but the stupid virus ruined our plan. Fuck you Coronavirus. Then we heard about all the pussy being abandoned, we thought we had to do something because Steel Panther makes it no secret how much we love…. cats. We hope this stream can help our friends at Heavenly Pets and give people at home something cute to see,” explains Steel Panther.
Steel Panther has been making headlines with their daily video vignettes helping folks sheltering-in-place know what day of the week it is. A short musical intro gives way to a band member explaining which day it is for their viewers. The series has gained such popularity that various entertainment friends have made cameos as well. Comedy legend George Lopez recorded a special video for Cinco de Mayo and joins a list that includes Corey Taylor of Slipknot/Stone Sour, Scott Ian of Anthrax, Jason Hook of Five Finger Death Punch, and Joey Fatone of ‘N Sync with more surprises forthcoming. The videos can be seen on all social media platforms. The band also recently released a music video for their newest single “Let’s Get High Tonight” from their chart-topping album Heavy Metal Rules (https://lnk.to/HeavyMetalRules). The Frankie Nasso directed video puts the heavy metal heroes in various musical styles including a black metal band, a Spanish mariachi band, a boy band, a Baroque classical quartet, and a country/western band. That video can be seen here: https://youtu.be/_l6sbhjm8pk.