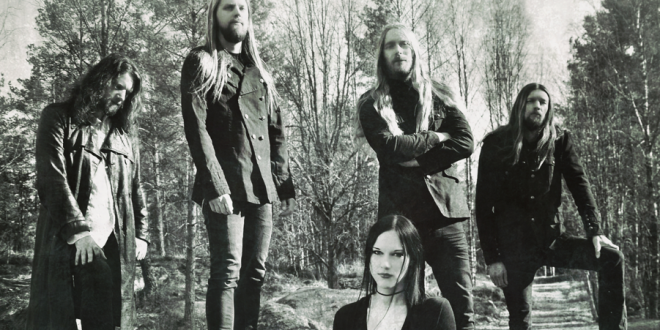 2
SHARES
FacebookTwitter
Today, the sovereigns of melancholic Gothic Doom Metal and colossal lyricism, Draconian, release the first single “Lustrous Heart”, off their upcoming album, Under A Godless Veil, out October 30, 2020 via Napalm Records.
“Lustrous Heart” slowly unfolds the gloomy universe in between doom and gothic – the unique trademark sound Draconian has been known for since the mid-90s. Anders Jacobsson‘s growls perfectly harmonize with Heike Langhans’ divine voice, while merging into hypnotizing melodies and slow, yet heavy guitars. The intense lyric video guides the viewer through the mystical ambience of the sky and leverages the radiance of their mournful instrumental driven soundscapes.
Draconian on “Lustrous Heart”:
““Lustrous Heart“ is the first single of our new album Under A Godless Veil. This album is the most diverse album we’ve made so far and we’ve waited a long time to share it with the world. We hope you’ll enjoy it as much as we do. Make sure to follow us on our social media for more news.“
Watch the lyric video for “Lustrous Heart” below:

Pre-Order Under A Godless Veil NOW!

A hauntingly doom spirit covers the world underneath a melancholic, Godless Veil.
Almost five years after the release of their latest long-player Sovran, Draconian announce the release of their new epos, Under a Godless Veil, out October 30, 2020 via Napalm Records.
The upcoming full-length delivers a captivating mélange of dreary doom and contrasting vocals and is the second offering featuring stunning singer Heike Langhans. The first notes of the opener will immediately draw the listener into a void of interweaving beauty, coalescing with paralyzing depression that leaves nothing but the desire of total immersion in the whole record. Under a Godless Veil carries the legacy of gothic doom metal à la My Dying Bride into a new decade of the genre.
Draconian states:
“To Draconian, Under a Godless Veil is by far the most diverse album we have created. Inspired by some of the music closest to Johan’s heart; everything from traditional Doom to scaled-down, Gothic rock-inspired pieces and more. Some will perhaps describe the songs as more refined and meditative. Some ambient elements have been added to the mix without overshadowing the traditional characteristics that are DRACONIAN.
Resonating with the compositions, Anders’s lyrical direction is ambiguous and a progression of the first two-three albums, yet more subtle while embracing the Gnostic philosophy more directly. One could say Under a Godless Veil is an act of contemplation; About living and dying and remembering who we are in a strange, abrasive world far from home.“
Under A Godless Veil tracklist:
1. Sorrow of Sophia
2. The Sacrificial Flame
3. Lustrous Heart
4. Sleepwalkers
5. Moon Over Sabaoth
6. Burial Fields
7. The Sethian
8. Claw Marks On The Throne
9. Night Visitor
10. Ascend Into Darkness
Under A Godless Veil will be available in North America the following formats:
-CD Digipak
-Digital Album
-2LP Gatefold Vinyl Black
-2LP Gatefold Vinyl Gold – mailorder only (limited to 300)
-CD + Shirt Bundle
-LP Black Vinyl + T-Shirt Bundle – USA mailorder only
-LP Gold Vinyl + T-Shirt Bundle – USA mailorder only

NewYork Based Photographer. Music Enthusiast with a background in Graphic Design. Whether I'm shooting a live event or just out wondering the streets its about capturing the moment.
Previous The Pretty Reckless Sign to Fearless Records
Next Steel Panther Give Back For #GivingTuesdayNow