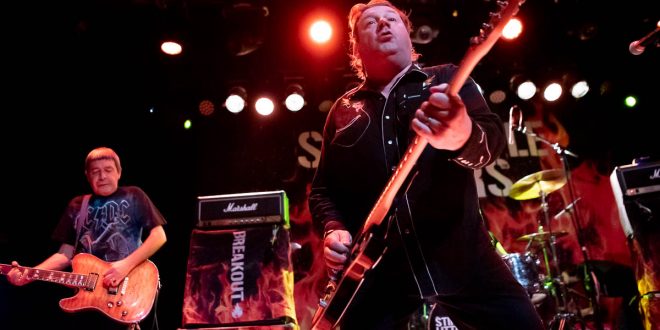 Celebrating the fortieth anniversary of their debut record, Inflammable Material, Belfast’s Stiff Little Fingers are touring the United States and playing the album in its entirety. Joining them on the road are San Francisco’s Avengers and the tour arrived in New York for a show at Warsaw in Brooklyn on Tuesday, October 22nd.

Avengers took the stage at 8PM and featured their original members of guitarist Greg Ingraham and vocalist Penelope Houston. The band were completed by bassist Hector Penalosa (of The Zeros) and David Bach on drums as Joel Reader and Luis Illades, who are also members of Pansy Division, were unable to tour. The band enthusiastically played songs throughout their extensive catalog such as “Teenage Rebel,” “Desperation,” The American in Me,” plus a cover of “Paint It Black” by The Rolling Stones.

The four members of Stiff Little Fingers, drummer Steve Grantley, bassist Ali McMordie, guitarist Ian McMallun, and singer/guitarist Jake Burns took the stage adorned in flames at 9:30PM and began their set with “Roots, Radicals, Rockers and Reggae” from 1981’s Go For It before launching into “Nobody’s Hero” from their first record.

Throughout their performance, Jake Burns introduced songs with stories or how they came to be. For example, he told the audience that “My Dark Places” was about depression, spoke about suicide rates in the United Kingdom, and encouraged men to talk to someone and seek help if they needed it. “White Noise,” was introduced as an anti-racist song, and before “Safe as Houses,” we learned that it was one of their favorite songs but they rarely played it live as it was written in a key too high for him to sing easily and it took him 21 years to realize he could just drop it a key.

Burns remarked that despite the celebration of 40 years of Inflammable Material,they also wanted to look to the future before performing a brand new song called “16 Shots,” which was written about the 2014 murder of 17-year-old Laquan McDonald in Chicago, IL, where Jake Burns now resides. This contemporary political song was a perfect lead into their most well-known one from Material, “Suspect Device,” which immediately followed “16 Shots.”

Naturally, songs from Inflammable Material received the biggest response from the crowd at Warsaw all night and the only low point of the show was when an audience member threw a can of beer on the stage while SLF first started “Wasted Life.” This led to Burns stopping the song to admonish the person and telling him to fuck off and starting the song again.

“And that’s it; 40 years in the blink of an eye,” was said by Jake Burns before the final song of the set, “Alternative Ulster” which preceded a two song encore. We were thanked for the four decades of support and since Stiff Little Fingers are still creating new music, hopefully us fans will be able to give them a few more.

Encore:
Tin Soldiers
Gotta Get Away 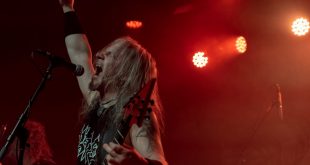 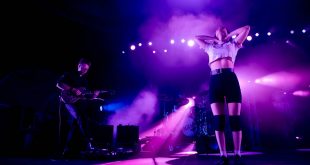