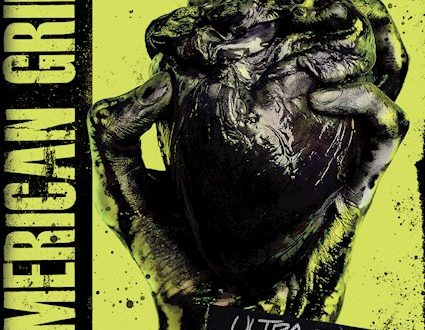 Produced by the group’s bassist Mike Morello, Ultra Black is the follow up to American Grim’s full length debut Freakshow. Throughout the thirteen tracks, lead singer Ryan Grim displays a talent for finding hooks. One of the first things that stuck out to me is there are a lot more programmed drums and virtual instruments on this album. That might be a choice made out of necessity, as a lot of this album was written while the band was on the road. There’s a wide mix of influences on this album and that becomes very apparent in Grim’s vocal range. Sometimes rap-singing, sometimes screaming, occasionally singing with a softer affliction or going really low (like on Ghost and Ultra Black), Grim really pulls out all the stops this time around.

Most of the album is hard hitting nu-metal, but occasionally it takes on a more industrial vibe with electronic drums and synth bass. Several tracks have almost trap-like beats on them. The title track’s chorus has a bit of a 80’s dance, dark wave sound. So it’s a real mix bag of genres. But it still always sounds like American Grim. There’s no doubt, however, that they’ve done a lot to evolve their sound since the last album.

It’s that sonic diversity that elevates the album. Every track pivots in genre a little bit. As the album progresses I found myself wanting to know what they would offer up next. Most importantly, every song has powerful chorus. The production throughout is clear and precise. It’s mixed so well, with expert layering of synth elements and samples. On a track like Paralyzed the percussion really stands out. The many different guitar tones sound great and vary a bit on each track. Back in the day a band might go into the studio, find a good guitar tone, and that would be how the guitar sounded for the whole album. Just looking at the first three tracks (Ghost, Nightmare, and Tell Me ) there is a plethora of different guitar tones.

There’s no doubt that this is a bigger, better effort than Freakshow. What makes it even more impressive is that it was produced by the bassist, without sacrificing a shred of quality. Here Morello sounds like a veteran producer. There’s so much polish on this production, you’d think the record label paid a ton for a hot shot producer. It’s great that American Grim has that asset at their disposal now. It has clearly benefited them, because this album sounds fantastic.