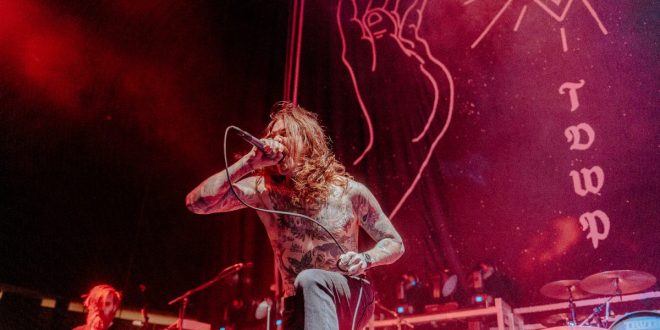 The Devil Wears Prada dropped their new album The Act on October 11 via Solid State Records. The band has partnered with Revolver to premiere the video for “Chemical.” Watch it now.

“I’m not one to get particularly excited about music videos these days, but I think that the technology [director] Kevin Johnson and the crew were able to employ for ‘Chemical’ makes it something special,” said singer Mike Hranica.

“‘Chemical’ is about coming to terms with the idea that all of our feelings — good and bad — are just chemical reactions in our brains. It is both a bleak and hopeful way to to view the world, but at times, it can help us to move forward,” said keyboardist Jonathan Gering, who co-wrote the song.

The band previously shared the track “Please Say No,” which is one of the most experimental yet powerful songs the band has ever released. Listen HERE.

“This just feels very make it, or break it for us,” says Hranica. “All bets are in on The Act. We tried to make something outside of the norm for rock, metalcore, or heavy music. We often hear commentary that ‘rock is dead’ now; I don’t think it has to be that way though. Look at the corners pop and hip-hop turn. Artists just need to reinvent themselves and make something creative and inventive again. Reinvention is what we’re driving towards.”

The Devil Wears Prada are currently on a headline tour in support of The Act. Norma Jean and Gideon will also appear. All dates are below.